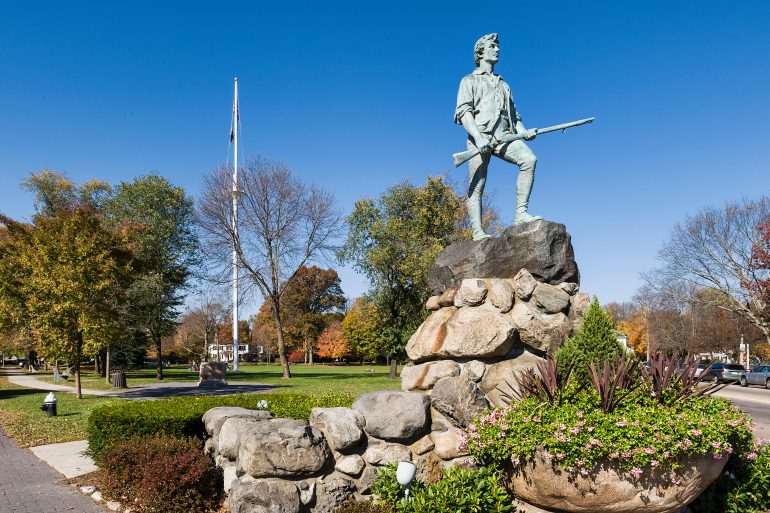 I’d not even known there was a debate; I’d just assumed that the “Shot Heard ‘Round the World,” referred to one unambiguous report of gunfire in the American Revolution, the definitive first, but it was Shane, fantastic docent at the Concord Museum, who informed me otherwise. There was the gunshot that started the donnybrook in Lexington, but the “shot heard ‘round the world,” refers to the first shot fired some hours later in Concord, and the famous phrase was coined nearly seventy-five years later by Ralph Waldo Emerson, a son of Concord and so hardly impartial. And apparently, it has been something of a rivalry for centuries—which place actually got the Revolution going. Shane informed me that the folks of Lexington tend to get far more agitated about the debate, suggesting that the rancor was borne of jealousy at Concord’s cultural fame in the 19th Century (Emerson, Thoreau, Hawthorne, Alcott, etc.). I mentioned to Shane that perhaps the folks of Lexington get so heated because they, in fact, are right and do not want their history commandeered. (Incidentally, I cannot recall where Schoolhouse Rock came down on this issue, but I do, all these years later, still recall the lyrics, “Take your powder, take your gun / And report to General Washington.”)

Lexington Battle Green is a pretty non-descript triangle of grass near the center of that village which is as stunningly beautiful as Concord, though one Massachusetts friend calls them both a bit too pristine. There is a statue of a minuteman high on a pedestal near the top of the triangle, and a handful of other monuments along the edge, including a stone obelisk built in 1799 to honor that day, underneath which lie the remains of seven of the eight minutemen who died there.

I headed there first thing in the morning, thinking I would knock it out before visiting the more elaborate battlefield in Concord, but that was a mistake. A guy from Florida I met on our guided tour said he erred in allotting too many days for Salem and Plymouth and not enough for Concord and Lexington, and he wasn’t wrong. When you go to Lexington (and everyone should go), plan to give it one full day, for in addition to the battlefield and main museum there are other buildings to visit—Buckman Tavern where the minutemen passed time awaiting battle, Munroe Tavern, which the Brits used as a hospital and where George Washington came for dinner in 1789, and the Hanckock-Clarke House where John Hancock and Sam Adams hid out during the battle because they were really wanted men.

Our guide, Chuck (names changed to protect the innocent) was dressed in summer Colonial garb (linen) and was superbly well-informed, which was to be expected because knowledge is power in Lexington: in order to participate in the re-enactment every April 19, you have to fully research the character you’re portraying, which in Chuck’s case was Ebenezer Porter, a fact whose significance will become clear. Chuck was a wealth of information, especially on the musket about which he spoke at great length, but then the musket was a key factor in those battles, and I did learn a lot, such as where we get the phrase “flash in the pan.” A little bowl on the side of the musket is where a soldier poured his gunpowder, and if the spark caused a bright explosion that failed to trigger the gun and therefore accomplished nothing of note, it was a flash in the pan.

As the story goes, the Brits were headed to Concord from Boston because they’d learned that weapons were being stored there, and they were growing rather weary of the guerilla subterfuge deployed by the Sons of Liberty, who dressed as Native Americans to disguise their identities. The Sons of Liberty were expecting such a maneuver, which is why they were poised with three alarm riders to warn Lexington and Concord, not just Paul Revere but also William Dawes and Samuel Prescott (there were 76 alarm riders throughout the entire area, two from each village). The only rider to actually make it to Lexington was Prescott, but Revere gets all the credit because of Longfellow’s poem, “The Midnight Ride of Paul Revere.” In his day, Paul Revere was a bit of a rock star, in part because of his legendary leadership among the Sons of Liberty, and that reputation must have carried weight well after his death. Or maybe Longfellow just went with Revere exclusively because it was easier to rhyme with than Prescott or Dawes.

When the Brits arrived at Lexington Green, approximately 70 armed Colonials awaited them, including Prince Estabrook, one of the twenty some slaves in Lexington at the time; there is a monument to him in front of Buckham Tavern.

The Colonial Leader, Captain John Parker, who was severely ill from tuberculosis (bet he wouldn’t refuse a Covid vaccine) and would be dead from the disease four months later, knew bad odds when he saw them, and 67 minutemen versus 750 British was bad odds, indeed. So he dispersed his men, and it was in that moment that the first shot rang out. At the Concord Museum the day before, standing in front of the terrific map that digitally displays the full course of the two battles, Shane told me that no one knows who fired the first shot. Almost all historians say that no one knows who fired the first shot. However, for my Lexington tour guide, there was no doubt who fired that first shot and why.

According to Chuck, two scouts had been captured by the Brits and held prisoner in a pen near Lexington Green—Asahel Porter and someone named Thompson whose first name I forget. At one point they made to escape. Thompson got away, but Porter was shot in the back, and nearby, witnessing it all, was Asahel’s cousin, Ebenezer (who, you recall, is the character Chuck plays every year for the re-enactment). Enraged at the death of his cousin, Ebenezer fired his musket at the guard who killed Asahel, but it was a flash in the pan, so no musket ball emerged. The guard responded by firing his pistol at Ebenezer, and since a pistol was the signal to commence battle, well, there’s your shot heard ‘round the world. Bedlam ensued.

“But I’m confused,” I said later that day to the woman who worked at Buckman Tavern, where I’d just done my self-guided audio tour and had heard the narrator proclaim no one knows who fired the first shot. “Why is everyone claiming no one knows who fired the first shot at Lexington, but my tour guide earlier told me exactly who and why?” The lady asked for that version, and when I related it, she smiled. “That version is family lore passed down by the Porter family. It was started soon after the battle, probably by Ebenezer or his children, and it continued to be passed down for generations and still survives.” Survives, I realized, maybe not even because there are any more Porter descendants but because there is one re-enactor who portrays Ebenezer and who did his homework and who, on tours, makes sure others hear the Porter version of events, which is exactly what Ebenezer would do. Marvelous, I thought. Brilliant.

The tour finished across the street at Ye Olde Burial Ground, where many of Lexington’s first citizens lay buried, including veterans who survived that day, their graves marked with flags. Chuck asked if any of us in the tour were veterans, and none raised a hand, and he said, “Freedom isn’t free,” in a sort of scolding tone that pissed me off a tad. Indeed, freedom isn’t free, and I have the deepest respect for the sacrifices made by military personnel and their families; for years I have done a lot of work with the Navy Seal Foundation, and a week before this trip I was at the funeral of my father-in-law, a Naval Academy graduate and veteran of the Korean War. That said, I didn’t need to be scolded simply because I’m not a veteran, and there is danger in the knee-jerk glorification of the military, something that historian Tom Nichols, among others, has addressed. Yes, they do put their lives on the line, but so do a number of professions including police, firefighters, doctors and nurses during Covid. Hell, these days in America, teachers, grocery store cashiers and Wal-Mart clerks are getting gunned down on the job. Meanwhile, many of us who are not veterans are currently engaged in battle against the greatest threat to our democracy since the Civil War, maybe ever, courtesy the MAGA volk and the bulk of the Republican Party. And being a veteran doesn’t ensure patriotism. Benedict Arnold and Robert E. Lee were veterans of the American army, and it didn’t stop them from becoming traitors. Timothy McVeigh and Michael Flynn are veterans. Dan Crenshaw is a veteran who, as Congressman, violated his oath to the Constitution when he voted not to certify the election, thereby trying to overthrow the democratic process and destroy freedom. And dozens of veterans were part of the January 6 Insurrection or are sympathetic to forces which continue to work every day to destroy our republic. No, freedom isn’t free, and we all have a role to play, and plenty of us non-veterans are fighting veterans who are bent on taking our freedom away.

These were actually my thoughts at the time, not only because of Chuck’s statement but also because while touring the site of where, militarily at least, our country began (and sorry, Concord, but despite Emerson’s attempt, you really have no right to the claim that yours was the shot heard ‘round the world), it was simply impossible not to think about the perilous moment our nation is in. And in a moment of serendipity too obvious to ever be plausible anywhere but in reality, Chuck led us to the stone marker commemorating the eight Colonials who died on that field: John Brown, Samuel Hadley, Caleb Harrington, Jonathon Harrington, Robert Munroe, Isaac Muzzey, Asahel Porter, and Jonas Parker. He groaned as we approached the stone, Chuck did, and eventually it became apparent why: like our democracy, it was broken. Thus, as we all should with our democracy, Chuck did what he had to do to put the stone back together as best as he could.