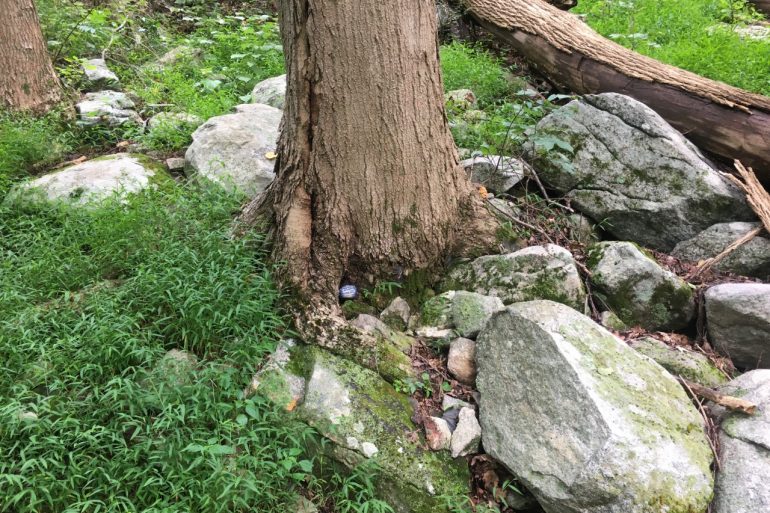 Litter and The Rock

The McDonald’s sack tossed into a grassy ditch, the brown bottle of Molson Beer chucked into a patch of wildflowers, the tennis balls that dogs failed to fetch floating at river’s edge, the Styrofoam worms-container abandoned by fishermen on the banks of a lake, the Pepsi can flattened in a parking lot—I despise litter. In one of the places where I hike, massive car parts such as bumpers and hoods luxuriate and rust amid bushes and trees, and I wonder how the hell they got there. In rural areas, country dwellers are wont to discard broken appliances into wooded acres adjacent to their yards, washing machines and dryers tossed into the forest as insouciantly as apple cores or peanut shells. I am a fan of outdoor sculpture gardens, accomplished art curated among natural landscape in a clairvoyant marriage of nature and the man-made; one of the best of these is Storm King in upstate New York. But a broken dishwasher shunted to the back forty is not art. Its despicable and gross. Obscene. An affront.

It speaks to such mind-numbing laziness and selfishness, litter does. I’ve had some friends try to argue that it’s the result of a lack of education, but I don’t buy that at all. People know better. At home, they don’t chuck empty beer cans or used diapers onto their kitchen floors; they don’t drop Whopper wrappers in the hall on their way to the bathroom. Nor do they toss their paper coffee cups or cough-drop wrappers on the floor at work. Folks know better. Throughout the country, there are “Don’t Litter” signs everywhere; have litterers never seen any of them? Back in the mid-90’s, when I lived in New Orleans, walls of trash the day after Mardi Gras were pushed with firehoses through the French Quarter to Canal Street where they were then hosed down to the Mississippi River and left to float to wherever. All involved with this effort knew what they were doing. The city is now working with groups to do better, but a lot of that bacchanalian trash still ends up in the Mississippi. One journalist wrote about a crowd chanting the approval of a krewe dumping its float in the river just last year. Do all of these people really not know better? Of course they do. They just don’t care. That’s not a lack of education. It’s a lack of decency.

One of the most noxious and destructive ideas Christianity has foisted onto this world (and there are a few) is Original Sin, a theory penned by Augustine based, in part, on his misreading of Paul’s letter to the Romans; brilliant as Augustine could be, he didn’t know his Greek. The idea that a baby is born corroded in sin because of something Adam did in the Garden of Eden however many thousands of years ago is simply neurotic. And hateful. A jagged and unloving notion littered into the landscape of humanity. Some of us don’t think the Garden of Eden scripture is about disobedience at all. Remember, the story was in existence for at least a thousand years before Augustine ever read it. Was it meaningless until he came along?  I side with those who think this story is about the mental and emotional pain that comes with growing up and learning how to think, eating from the tree of knowledge of good and evil, becoming mature, responsible, accountable adults. Eve and the serpent have traditionally gotten the bad rap, but the two who lie are Adam and God. However, if you’re looking for justification to subjugate women and hold spiritually tyrannical sway over the masses, then the theory of Original Sin is a cracklin’ good place to start.

All of that said, I do find it tempting to submit to the idea of Original Sin whenever I see someone just toss a plastic bag from his car because it was simply way too demanding to have to keep it for fifteen miles until the next rest area where he might have to walk a whopping ten feet or so out of his way to drop it into a trash container. But people don’t do that because of some inherent sin they’re born with as a result of something a person who didn’t even exist did thousands of years ago in a make-believe garden; they do it because they’re self-centered and lazy, two attributes so easily accrued in our American society where hedonism and selfishness (often portrayed as individuality) are lauded as the highest good. It’s my God-given right to throw my Capri Sun container anywhere I damned well please! It’s my God-given right not to wear a mask that will prevent the spread of a pandemic because hey, it ain’t killing me! What fools we mortals be, though stop blaming Adam for it, and stop saying infants are just doomed to be born that way.

Those of us forty-five and older are likely to remember a commercial in the 70s that featured a brown-skinned man dressed as a Native American canoeing on a river riddled with trash before pulling his canoe onto a bank festooned with more trash and walking to a road where a passerby in a car tosses a bag of trash at his feet. The commercial closes with a close-up on the Native American, a single tear coming down his right eye. It’s the kind of respect for Native American tradition that can almost make you forget that our nation slaughtered these people in a decades-long genocide. For the younger set in the 70s, there was also Woodsy Owl singing, “Give a hoot / Don’t pollute. / Never be a dirty bird.” All indications are those public service announcements had some kind of impact, that is, our nation as a whole did clean up its act a bit, at least enough so that the Cuyahoga River in Cleveland was no longer catching fire. Maybe the issue of littering needs some more hardcore PR.

As a follower of Jesus, I’d like to think religion could be of help on this, but I have my doubts. Few corporations tout their religious credentials more than Tyson Foods, which has even established a Center for Faith in the Workplace at the Sam Walton Business School at the University of Arkansas. Tyson Foods provides 98 chaplains at its plants throughout the country, and credit where credit is due, the chaplains are ecumenical, serving people of all faiths, all of whom are welcome and hired at Tyson—no small feat in our land where, under the leadership of ministers like Franklin Graham, hating people of other faiths has become core Christian behavior for many believers. And yet, when it comes to polluting our water, few industries are worse than meatpacking, and in that arena, no company is nearly so bad as Tyson. According to a 2018 study, Tyson Foods operates the most plants that violate environmental regulations—26 from this report followed by Pilgrim’s Pride with a mere 7. (Pikers). A Tyson plant in Dakota City, Nebraska, dumped an average of over 3000 pounds of nitrogen pollution into water systems each day. Incidentally, the year that this report monitored, Tyson Foods generated over $41 Billion dollars in annual sales. If Tyson and all its faith in the workplace cared, it could stop this desecration of God’s creation, which also happens to be our freshwater supply. Maybe those 98 chaplains can pray that their bosses stop poisoning our water.

I have become an avid litter gatherer. I am not some bastion of altruism, and it’s not as if picking up litter is some gruesome, demanding task like breaking rocks with a sledgehammer or listening to Olivia Newton John. I do it because I own a golden retriever who has to be exercised every day, and so I’m often in the woods hiking when the weather is cool or swimming in mountain lakes when the weather is warm. I mostly go to a couple of state parks near where I live, and there is always too much litter in these woods. So I pick it up. I pick it up because it’s ugly. I pick it up because walking your dog every day can get boring, so it gives me something to do. I pick it up to protect him and other dogs as some of the litter is glass which can, and does, easily get broken. And I pick it up to honor God’s creation.

A couple of weeks ago I was deep in the woods gathering litter when I spotted something unusual. I had wandered a bit off of the trail to fetch a plastic water bottle. As I bent to grab the bottle, something peculiar off to my left caught my eye; it sat in the crotch of a massive old tree. I moved in closer. It was a small, perfectly smooth, oval rock on which was painted in perfectly legible print this message: “the universe is change; life is what our thoughts make it. –M. Aurelius.”

I stood in enchanted wonder. Some sojourner had artfully painted this beautiful quotation onto a rock then tucked it off the path deep in some woods on the remote chance that maybe, just maybe, someone would happen upon it and read, and I happened upon it because I was picking up litter. Of course, it was all quite accidental. I’m not pushing some kind of moral that good things happen when we do good because much of human history has shown that simply isn’t the case—the world is random and good things and bad things happen to everyone for no reason whatsoever. After all, the person who littered that plastic water bottle I was picking up was just as likely to see the rock that I saw. The fact is if you litter, you are acting selfish and lazy, and if you pick up litter, you are not, but to both kinds of people, grace, such as in the form of a painted rock, is always waiting and available, a gift of rare beauty that can leave one filled with delight, wonder, joy and awe.

1 thought on “Litter and The Rock”