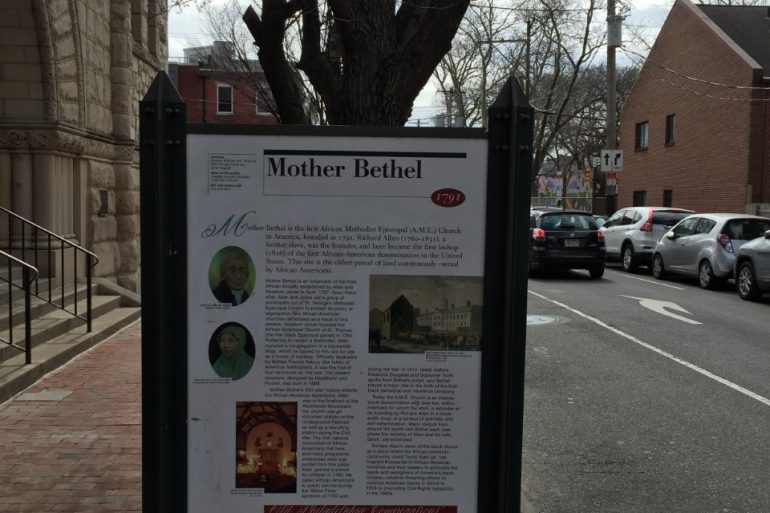 If you happen to be in Philadelphia at the terrific new Museum of the American Revolution and, like the modern GOP, are tired of the Constitution and ready to leave it behind and try something new, rather than visit the Liberty Bell or Independence Hall, go a little further, about a mile south, to visit Mother Bethel A.M.E. Church. (But then do be sure to circle back and hit the Ben Franklin Museum because it really is great). Mother Bethel is the oldest African American Episcopal congregation in the nation, established in 1794 and founded by Richard Allen, among the most incredible people from early in our nation’s history.

Allen was born on February 14, 1760, in Philadelphia, Pennsylvania. We think. Historian Richard Newman, in his fantastic biography on Allen, Freedom’s Prophet, notes that there’s a chance he was actually born on that date in Delaware. (Newman’s biography is the primary source for this essay.) As with so many who were slaves, Allen’s biographical details can be sketchy and unreliable, especially since he didn’t bother to clear too many of them up in his own autobiography, which he wrote late in life; Allen believed that private details of one’s life simply didn’t matter. Anyway, his first slave master was Benjamin Chew, a wealthy attorney and magistrate who eventually settled in Philly but still owned enough property in Maryland and Delaware that he had over 300 slaves to work it all, most of them born in those states but some born in Philadelphia. So we’re not too sure where he was born, but Allen himself believed it was Philly.

When he was eight, he, his mother and three siblings were sold to a new owner, Stokely Sturgis, a farmer in Delaware who was a neighbor of Chew’s though not nearly as financially successful. (We know nothing of Allen’s father about whom Allen himself never spoke.) But not much later, running short on funds, Sturgis sold Allen’s mother and three of his siblings to a different owner, separating the family, a common fate among slaves so cruel it is difficult to fathom. When someone once tried to argue with me that slavery was little worse than the life of impoverished white factory workers up north, I responded, “Factory workers were never ripped from their families.” I could have provided dozens of other arguments, but that one sufficed to hush him up. I continue to marvel at the number of people who have no concept of just how evil slavery was.

Allen was 17 when he gave himself to the Lord, born again in a Delaware field where an itinerant Methodist preacher brought the gospel to a group of slaves. Allen was devout. For the rest of his life, he was a minister who changed America through his faith, but he was also incredibly shrewd. He saw religion as a gateway to freedom, and he persuaded a preacher to bring the gospel to his master, convincing him of the evils of slavery. Sturgis finally acquiesced and drew up a contract by which Allen could buy his freedom, which Allen did through five years of additional labor on top of his duties as a slave, an almost incomprehensible work schedule.

Once free, he headed to Philly where he worshipped at St. George’s Methodist Church, another historical place to visit if you’re ever in town although I can’t speak to it because one church tour was all my wife and son were going to agree to. It was at St. George’s that he eventually left and formed a breakoff church, but again, the details are murky. The story goes that he and other black parishioners were praying in pews near the front of the church, but white church members were so appalled by these blacks not praying in the pews relegated to them up in the balcony that during the prayer they physically removed the blacks. But here’s the question: Did Allen set them up? His church was segregated, which he despised, and he knew that blacks would never be accorded any power in the church and would never really be able to worship freely. But he also knew, argue some historians, that he couldn’t just break away without cause, for he would still need the support of the Methodist Church to establish his own church, and he would need financial support from whites as well as their sympathy so that there wouldn’t be a violent backlash. The best way to accomplish that would be an incident so morally reprehensible on the part of the white worshipers that Allen would not alienate the support he needed when he walked away. Historians are split on whether or not this incident was organic or orchestrated by the shrewd brilliance of Allen. Either way, it happened because even Northern Christianity was inherently racist, and the sad fact is that the Christian Church still continues as one of the most racist institutions in our country.

Martin Luther King, Jr., who made a habit of speaking the unvarnished truth, noted that the most segregated hour in America was Sunday morning, during church. Robert P. Jones is a theologian who recently published White Too Long, a book about racism in American churches, and as a trained sociologist, he devised and conducted a number of studies and surveys to measure racism in our churches. The numbers are grim. On his Racism Index in which 0 denotes the least racist and 1 denotes the most, white Evangelical Protestants have the highest median score of .78, which hardly comes as a surprise given that the overwhelming majority of them believe Trump to be a gift from God. White Catholics come in second with a score of .72, also not much of a surprise to anyone whose been to Boston or scanned that city’s history; and bringing up the rear are white mainline Protestants with a median score of .69. As if all of that were not shameful enough for those of us who call ourselves Christian, religiously unaffiliated Americans have a score of .42. That’s right. The more Christian you are, the more likely you are to be racist. That’s embarrassing. When it comes to racism, we white Christians aren’t the solution; we’re the problem. We don’t fight it as much as we further it, and shame on us all. It’s a problem we need to address.

Richard Allen addressed it by forming his own church, Mother Bethel Church, whose original structure in 1794 was Allen’s blacksmith shop on the corner of Lombard and 6th, where today’s far larger structure stands, this one built in 1890 after the church had gone through a few permutations over the century. It is open for a tour, which I happily took, having phoned ahead to set it up, which individuals or groups need to do. Our guide was a volunteer who is a member of the church, a retiree from the finance world who was engaging and witty enough that even my twelve-year-old son was not bored, which is saying something for a pre-teen on a tour of a church. The sanctuary is large and beautiful with old wood and massive stained-glass windows.

Downstairs is a museum with a number of artifacts including the anvil from Allen’s original blacksmith shop, some lovely paintings, Allen’s Bible, which is a 17th Century artifact gifted to him by the white abolitionist Thomas Garrett, and even the crypt where Allen and his second wife, Sarah, are buried (his first wife died young). The building is registered as a National Historic Landmark.

Even after Allen established this all-black church, he was still under the auspices of the Methodist Church and still largely under the control of whites. It was only after a protracted legal battle that the church was able to completely break free in April of 1816, at which point Allen and his peers officially formed their own sect, the African Methodist Episcopal Church, a denomination that numbers in the millions today. Allen was elected its first Bishop.

Richard Allen had a massive impact on our nation’s religious history and history, although he is not nearly well known enough today; there is so much more to his story which I’ve only glossed and Richard Newman adroitly probes. Frederick Douglass said that there will be no one in the American annals who “will be longer remembered or whose memory will be more sacredly cherished by coming generations of colored Americans than will the name and character of Richard Allen.” W.E.B DuBois was a champion of Allen, as was James Baldwin, who called him one of the great “poets” of black aspiration. He was a minister, a bishop, an abolitionist, a writer, a father and truly a founding father. If you don’t know him, you should. A good place to start is Mother Bethel Church.