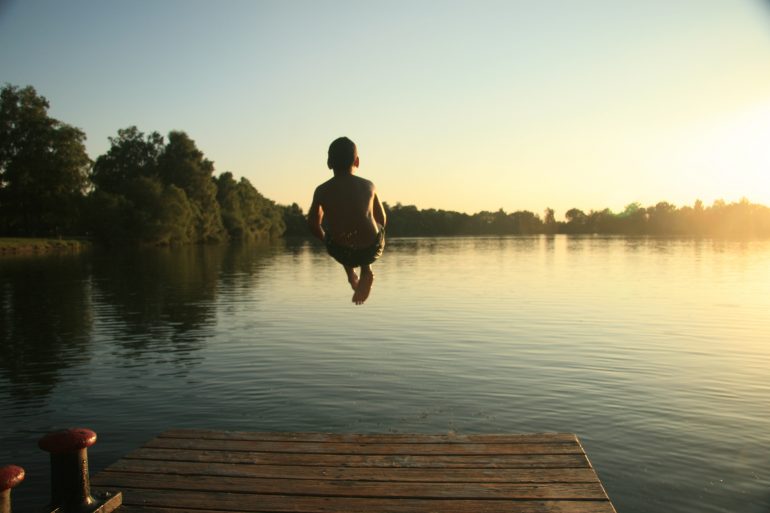 This past summer it was Moxie Falls, Maine, in the remote northwest region of the state, a little over an hour south of the Canadian border and west of Moosehead Lake. The trail to the falls was level and well-worn, mostly dirt but with occasional sections covered in pine needles or leaves. The place to jump off was at a swimming hole below the falls, which required a descent down a steep slope of dirt and loose rock. It was my son, Jonah, and his friend, Jasper, both twelve, who found it: a boulder with a flat surface about five feet above the water. By the time I’d caught up with them, they’d even swum around the water below to check if it was deep enough for our jumps. It was. We must have jumped for an hour, each of us over and over, the water clear and cold, the nearby falls boisterous, the late-afternoon sun finding a way between clouds and over the green mountains to shine into our vicinity. It was very near sublime.

The summer before it was two places, one in Portugal, one in Spain. We were staying in northern Portugal, the Geres Mountains region, and I told Eduardo, our guide, that we really liked jumping off of rocks into water. He drove us north over the border into Spain, the Galicia region—mountainous, arid, remote. He parked the truck, and we hiked down the wide gravel path of an old Roman road built almost two thousand years before, I think by Hadrian but I’m not quite sure. “No one knows about this place,” Eduardo said as we continued our hike off the road and into the mountains. “No one is ever there.”

Someone was there—two people, in fact, a middle-aged couple from Germany who admitted the only reason they found the place was that they got lost. No matter. It was small cenote of pure, cold turquoise water surrounded by boulders and cliffs. The boulder we jumped off of that day, over and over, was about ten feet high. The Germans joined us, and even my wife, who despises cold water, could not resist.           Two days later came a canyoning tour my son and I took with two expert guides deep in the Portuguese Geres, a day of repelling and jumping off of cliffs thirty feet high.

I don’t know why I get so much joy out of jumping into water; it’s easily one of my favorite things to do. And it’s most fun in natural settings. At my local swimming pool, I am something of a legend on the diving board because of my cannonball (I bring some formidable Midwestern girth to that table). Whenever I head to the diving board, many of the kids hurry to the deep end where they tread water in anticipation of my waves and splash. And like the mailman (or The Mailman for you Karl Malone fans), I always deliver, dousing and deluging those kids. But when I jump off of diving boards, I get mentally tired before I do physically; I get bored before I get winded. When I’m jumping into water out in nature, I never get bored. Ever. I just finally get exhausted. Or cold, as those natural settings often entail water that never approaches warm.

There is great and pure joy in the act of jumping, and it’s got its own cliché to prove it: no one is ever described as running or squatting for joy. When baseball players clinch the World Series and come together to celebrate, they are almost always jumping. At Camp Randall Stadium in Madison, Wisconsin, at the end of the third quarter, there is the “Jump Around,” when all 81,000 fans stand up and jump repeatedly, a scene so raucous that it was temporarily suspended in 2003 when the stadium was undergoing some construction. And fun, as is obvious by the faces of the fans. It is a unique moment of unbridled joy for 80,000 plus, and all they are doing is jumping. That simple human move has its power, its allure. A few years ago I had a family reunion near Fayetteville, West Virginia, where stands the New River Gorge Bridge. While we were whitewater rafting down that river, our guide told us that the third Saturday of every October, officials there host “Bridge Day,” when they close the bridge down for people to rappel and BASE jump. The bridge sits nearly 900 feet above the river—a mighty leap, but of course that’s hardly the only place where people go to BASE jump or bungee jump. The move has its allure.

But for me in places like Moxie Falls, it’s about more than just jumping; it’s also about the landing in water, that playful sound of a splash, the exhilaration of the cold water, the sudden change of sound and sense when your head is immersed under water, descending until that moment it stops, submerged in momentary suspension before it slowly ascends on its own toward sunlight and air, like a plant. Whatever it is that happens in those moments is something common and accessible yet still magical and holy, like when your child falls asleep in your arms. The promise of those moments is why my favorite swimming holes have always been in rivers or lakes. When I was a kid in rural Illinois, every summer a large group of us went to the Current River in Missouri for a float trip, two to every canoe, and invariably we younger ones found a cliff to jump from, which we did for hours. I enjoy the waves of the ocean, the rougher play in its foamy tumult, but I’d opt instead for a calm lake with a floating dock any day of the week.

But even take away the water, there still resides the fun of jumping. I suppose that as an act of elevation, it simply can’t help elevating our souls, our selves, even if only for a moment—an action infused and informed by the spirit and essence of play.