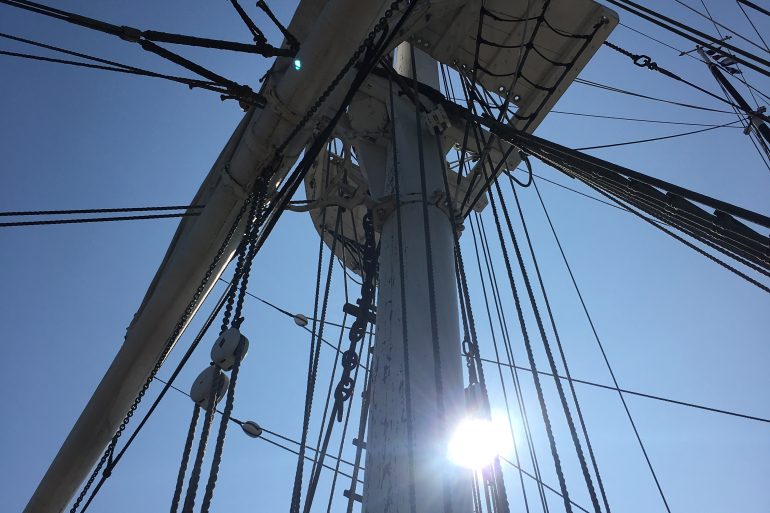 In college, I was forced to see the movie Mystic Pizza, and I have resented the coastal town of Mystic, Connecticut, ever since. The assignment was to write a movie review, but rather than each of us students picking the movie we wanted to see, the professor mandated we all see the same movie so we could better compare our reviews. We had a vote. I wanted to see the new Woody Allen movie. The class voted overwhelmingly for Mystic Pizza. I simply hated it. Today, it is remembered as the movie that launched Julia Roberts’ career, but to me it will always be an obnoxiously treacly and sentimental coming-of-age romantic comedy, and I’m even a fan of sentimental. Hell, I get weepy watching commercials these days, and if I just hear the words “dog, movie” in the same sentence, I’m a wreck. But I loathed Mystic Pizza. And this despite that another of its breakout stars was Annabeth Gish, who’s from Cedar Falls, Iowa (no, not Cedar Rapids, home of the National Czech and Slovak Museum, Cedar Falls), and I’m always pulling for my fellow Midwesterners.

As a result, whenever I heard about Mystic, Connecticut, I simply ignored the reference, having prejudged the village, like the movie, as not worth seeing. But last week an old friend now living in Kentucky was staying with his family for a week in neighboring Groton, so I made the trek up for the day, and we’d planned ahead to take his kids to Mystic Seaport Museum, the country’s largest maritime museum. There really are way too many things at this museum to do in just one day, including a planetarium and boat rides, but I had no real interest in those to begin with. I’m not a big fan of boat rides as I always prefer to be in the water, not on it, and planetariums are best visited on cold or rainy days. I wanted to see the re-created 19th century seafaring village. I am a sucker for these type villages, and I’ve been to a fair number of them across our fair land. Of course, none quite compare to Colonial Williamsburg in Virginia, and being an Illinois boy and devotee of Lincoln, I have a real soft spot for New Salem just outside of Springfield. But other than Williamsburg, the recreated village at Mystic Seaport is, by far, the best museum of its kind that I have visited.

It contains over two dozen buildings ranging from private homes to a smithship shop to a chandlery to a church and schoolhouse and general store. Many were original constructions transported to the museum grounds, antique buildings of ancient stones and resonant old wood. Most of the workers are not in period costume but are experts in their craft. The shipsmith was a local engineer who’d been a hobbyist blacksmith for over two decades. My friend knew of and asked about Lewis Temple, a former slave from Richmond who, as a black freedman in New Bedford, invented what became the gold-standard harpoon, known as the “Temple’s Toggle” because of its moveable head which did not let a whale escape. The shipsmith then showed us one that he had made. I was also remarkably impressed by the cooper. Hey, if you never have before, go look at a barrel and try to figure out how on earth they make those things—how do they get the wood to bend without breaking, and how do they get all of those tapered ends to fit so tightly together that they don’t need any kind of caulk to prevent it from leaking? I also learned some catchy info on 19th century products from the young woman in the General Store, such as all tobacco back then was flavored with licorice. My friend said the sailmaking is a pretty impressive display, too, but alas, they weren’t making sails that day.

The big prize, at least for me, was the Charles W. Morgan, the last surviving wooden whaling ship and the oldest American merchant ship afloat. I am fascinating by the whaling industry in America, and not simply because I love Moby Dick. At its height in 1880, whaling was the fifth largest sector of the American economy, and it wasn’t just about the whale blubber; it was also about ambergris for perfume and baleen (cartilage) to make corsets, all of which can be learned at the absolutely fantastic whaling museum in New Beford, MA, a little over an hour northeast of Mystic. Nantucket was the original capital of whaling but eventually gave way to New Bedford in large part because they’d run out of lumber around Nantucket to make ships, such as the Charles W. Morgan which was launched in 1841 in New Bedford, retired finally in 1921 and moved to Mystic twenty years later.

It is beautiful. An exquisite work of art. The intricacy and complexity of its boom, masts, sails, rigs, spars, yards and ropes is breathtakingly stunning to behold.

On deck the captain’s wife had a lovely little room of her own with bed, chair and birdcage, and belowdecks the captain had some pretty fancy digs himself, two rooms—a fancy sitting room with desk and chair and couch as well as a bedroom with large bed, sink and private privy. Along both sides were additional bedrooms with a bunk beds, small beds but still just two to a room. It was the front of the ship where hell awaited the lowliest of the crew—a largeish room with somewhere around fifteen bunk beds, all too small to accommodate a grown man. Imagine sleeping among thirty farting men in a cramped room in those hot tropics or those storm-tossed seas where even the heartiest must have been victims of seasickness. The average age of these sailors was under twenty because, like working the grill at McDonald’s, it was a job you took only if there was nothing else available.

On deck, we sat for a presentation of what the sailors did during their leisure time. There wasn’t much of it; these guys worked four-hour shifts, sleeping in between, and there was almost always something to do. Still, there was some leisure, and we watched volunteers sew sweaters or repair items as they sang popular shanties, led by a young man with a beautiful baritone playing a mandolin. Often, these young men were on these journeys for so long that they outgrew their sweaters, so they had to undo the yarn of them then reuse that yarn for a larger sweater that was probably shorter but at least now fit their growing shoulders and chests. It was pretty fantastic to sit on the deck and hear that music during the evening hours of a summer day while the sun set gauzy over the heavily-wooded acreage that hugs so much of the coast in the northeast. I should never have let a stupid movie keep me from visiting that town, that museum, for as long as I did.