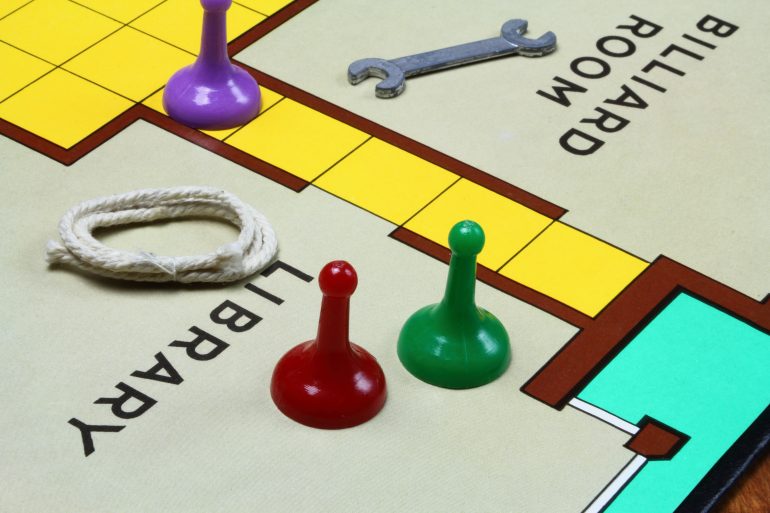 Scrabble is to board games what The Beatles are to rock groups, that is, so superior to all of its peers that it’s simply not fair to include it in the discussion. But once we remove Scrabble from the fray, out of all that remains, what is the best? Is it Life, with its plastic car game piece and plastic sticks that represent children and its cool board that includes hills? Or perhaps Sorry, which is so much better in adulthood than one has reason to expect? Is it the war games Stratego or Risk, or the mind games like Pictionary or Trivial Pursuit, or is it that great dark beast that hangs over every discussion on board games, Monopoly, thus showing that its name works on so many levels? (Of course, with Amazon, Google and Apple posing as our new best friends while they slowly take over the world with the aid of recumbent Congressmen and women, who needs the board version of Monopoly anymore? Hell, a successful Google search feels like passing Go; and shopping at Amazon is as relaxing as taking a ride on the Reading Railroad.) Obviously, the answer is different for everybody, but just as obvious is that everybody who doesn’t answer Clue is wrong. The game can feel like purgatory if played with just one player who’s not paying complete attention, but then that’s essentially true of every game. I’d rather get punched in the face than sit down to a game with someone to whom I have to keep saying, “Your turn.” But anyway—back to Clue and some of its real-life connections (or Cluedo, as it’s called in Europe, which is a goofy and stupid name).

One of my favorite travel activities has become the ghost tour, and cities everywhere are establishing them. For the uninitiated, they’re tours at night that focus on the ghost stories and dark sides of towns—the hauntings, the murders, etc. Some places, like New Orleans and Savannah, have a decided edge on this stuff, but thank goodness evil lurks everywhere, and so cities from L.A. to Cincinnati to Boston to Richmond and many many more are getting in on the ghost tour act. Honestly, whenever you travel, you should look for one of these. Some can have some chilling moments and eerie tales, but all of them, at least all of the ones I’ve been on, are fascinating explorations into the history and culture of a place.

Of course, no place in America is more ideal for said ghost tour than Salem, Massachusetts; some cities clearly have to scramble to garner enough material for a tour, but in Salem it’s an embarrassment of riches, what with the witches, pirates and decades of uptight Puritans, for nothing fosters dark and lascivious deeds quite like repression, especially of the religious variety (see: Church, Catholic; scandal, pedophile). I have been to Salem three times in recent years, and each time I signed up for the Black Cat Ghost Tour, a small outfit run by a young couple, Daniel and Lara. All three of the tours I’ve taken have been led by Daniel, who is truly a fount of local lore—historic, literary, cultural. I have even engaged in follow-up emails with him to get book recommendations on specific topics. When it comes to books on those witches, he’s read them all and most highly recommends Mary Beth Norton’s In The Devil’s Snare while I prefer John Demos’ Entertaining Satan. But I will have plenty to say about Salem’s witches in another post; this one is about Clue.

At 128 Essex Street in Salem stands the Gardner-Pingree house, a large brick structure built in 1804 that Daniel often includes as a stop on his nighttime tour. In 1830, Joseph White, the octogenarian owner of the house at the time, was murdered in his bedroom, and while two brothers named Knapp were arrested for the murder, the truth is that White was one of those rare SOBs who managed to have just about everyone in town wishing he were dead, so the list of suspects was legion. But White was the uncle of the Knapps, and he was loaded, and they wanted their inheritance sooner rather than later, so they hired one Richard Crowninshield to kill the old guy while they stood guard outside; Crowninshield killed himself before he could be tried.

The date of the Knapp trial was set, and none other than the famous Daniel Webster came to town to prosecute those Knapp boys. The night before the trial was to begin, however, the judge set to hear it, Justice Isaac Parker, died under mysterious circumstances. Nonetheless, the trial went on, and the Knapp boys were found guilty and hanged, and this entire mini-history has had quite an impact on our culture. It led to two haunted houses, both the Gardner-Pingree house and the home of the Knapps; an owner of the Knapp House actually had it moved back one lot in the hopes that the ghosts would remain on the original space. They didn’t. The murder also led to a famous short story, “The Tell-Tale Heart,” by Poe. And finally, it led to Clue. Two grandnephews of Isaac Parker, the judge who died mysteriously the night before the trial, were none other than the Parker Brothers of board game fame. In the late 1940s, Cluedo existed in the UK. The Parker Brothers bought the rights for America, changed the name, and transposed the layout of the Gardner-Pingree mansion onto their board game. But the fun does not stop there.

This past summer I visited Mark Twain’s House in Hartford, Connecticut, with my eldest sister and nephew. It is an idiosyncratic mansion full of charm and wit whose building was funded by Twain’s wife, Olivia Langdon, who came from some serious money in Palmyra, New York. This was the house where Twain would go on to write his major works and make enough money to keep the family happily ensconced there until he made a bonehead investment that bankrupted them. Eventually he would make enough money to pay off his debts and return, but by then one of his daughters had died in the home, and it was too painful for him to be there.

We arrived at the house and museum, and we approached the counter to enter. The lady behind the counter, a short woman approaching sixty, asked if I’d been to the Twain house before.

“Oh, I can’t wait to go there,” she said. “My husband and I are planning to get out there some day.”

“Well if you’re doing some Twain traveling,” I told her, “you also have to get out to Angels Camp, California. It’s in—wait for it . . . Calaveras County. I stumbled upon it a couple of years ago, and each year they still have a frog-jumping contest. I missed the finals by one day.”

For those who don’t know, one of Twain’s most famous short stories, and the one that pretty much got his career going, is “The Celebrated Jumping Frog of Calaveras County.” But the lady behind the counter knew, and we’d launched into a giddiness of shared Twain love.

“What’s your favorite quote?” she said, which would have driven one of my former college professors crazy because “quote” is a verb and she should have asked what my favorite “quotation” was, but no matter.

“‘All Indians walk in single file, or at least the one I saw yesterday did,’” I said before asking her the same question.

You cannot do a self-guided tour here. You must choose between a regular tour done by an informed docent or a Living History Tour, done by an actor in period garb playing the role of an actual person, such as Livy Clemens, Twain’s wife, Joe Twichell, Twain’s best friend, or George Griffin, the former slave who became Twain’s butler. My crew took the Lizzie Wills tour, Twain’s gossipy maid, and our actor was magnificent, down to her accent. As stated, she gives the tour as if it is another day in the late 19th century, and the Twain family is still living there. She answers everything in the present tense, and for any questions referring to something after Twain’s time, she answers those out of character at the end of the tour. It is only when she comes out of character that you realize just how terrific she was in character. I can’t wait to go back and get the George Griffin tour.

But what, pray tell, does any of this have to do with Clue? Well, on certain Fridays, an improv group turns a tour in the Twain home into a live-action game of Clue in which participants must figure out who killed Pap Finn. It’s already sold out for September, but for those in the area, it looks like there are some tickets still available for December 14. Monopoly could never do something as cool as this.