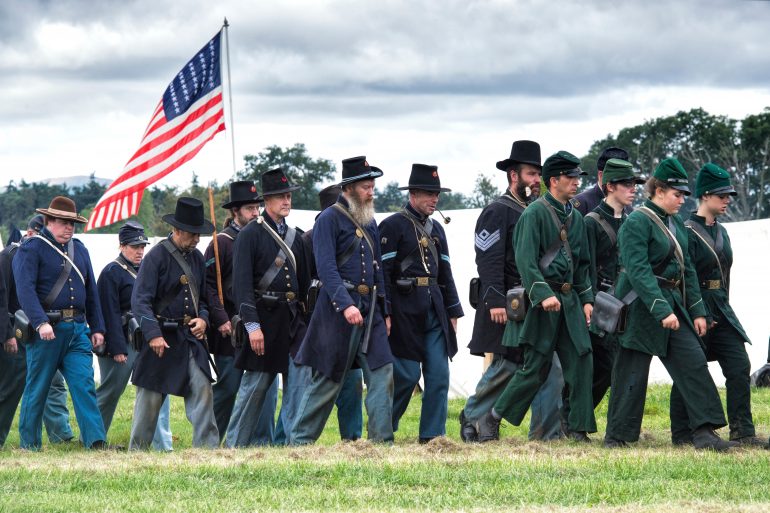 Those folks who wear period clothing and reenact famous battles—I’m not sure I ever verbally poked fun at them, but I’m sure I spent some time thinking they were a tad goofy. But then again, maybe I didn’t. I’ve always had a quirky hobby or two myself, and for a long time I’ve openly admired anyone who did something, anything, rather than sit on the couch and watch TV and bitch about how stupid everything is; it was in my early forties when I conceded that the nerds really were having more fun in life than anyone else. So I’m not sure I ever thought those reenactor types were that whacky, but if I did, it came to a halt a couple years ago when I took my young son and some neighbor kids up to Fort Montgomery, a fantastic Revolutionary War battle site on the Hudson River in the shadow of the Bear Mountain Bridge. The site encompasses fourteen acres and has large remnants of the original stone fortification; it also has a crisp and shiny little museum as well as a terrific gift shop, which is always key as my love for souvenirs, especially mugs, knows no bounds.

It was a gray and cool day in October when we went, and to my surprise and delight, it was also a day when people were going to reenact the battle. Thus, when we arrived, soldiers were strewn all over the area—the British Loyalists and their Hessian mercenary allies, the ragtag American militia, all in accurate costume and carrying muskets, swords, bayonets. There were canvas tents and horses and women cooking stews over open campfires. One group of soldiers wore a peculiar hat, a tall, conical thing that came to a rounded point at top, and my son asked me why their hats were so different. I told him to go ask them, and he did, and one explained how they were Hessians from German-speaking lands, and he elaborated on why they wore what they did and why they were fighting with the British. In that moment, my mind changed completely on these reenactors; I saw them for what they actually were: interested people with an interesting hobby. As the man spoke with my son and his friends, teaching them history, I stepped forth to listen and ask my own questions. From that point on, we were fully engaged, talking to other reenactors, asking questions about weaponry, food, clothing, the actual battle that would be reenacted later that day. I walked away with a deep admiration for these reenactors but also a string of questions about their hobby. As luck would have it, a couple of years later I became very good friends with a lifelong reenactor, a man in his sixties who’s been doing a variety of reenactments for decades. I’ll call him Jake (I happen to be rereading The Sun Also Rises right now, although I’m also rereading Isaac Singer’s Enemies, A Love Story and could just as easily call him Leon Tortshiner).

Jake did his first reenactment when he was fifteen. He lived in the mountains of North Carolina, and it was a French and Indian War event. When I asked why he did it, he said he doesn’t really remember but that he was always interested in military history. His father was an Army colonel in World War II, his four brothers served, one in each branch, two going to Vietnam, and Jake himself attended the Carolina Military Academy and was all ready to go to West Point until he had a frank conversation with himself and realized he was too fiercely independent to survive the military. Instead, he got married right out of high school and moved to Wyoming where, among other things, he pursued a lifelong study of Native Americans; he’s part Seminole and has written two fine books on the Plains Indians. He makes a large part of his living as a lecturer at colleges and museums around the country.

Essentially, there are two kinds of reenactments, public and private. The public events occur over two or three days and, as the name implies, are open to the public. They culminate in a battle sequence that is very scripted as it tries to imply the real action of an actual battle in history, and the battle often lasts no more than ten or fifteen minutes. As regards the gear, there are different standards for different events, but there’s always a minimum standard that requires authentic uniforms, weaponry, eating and sleeping gear. And even if there is deviation, it is disguised. For instance, during hot summer events, you can have a cooler, but it can’t be visible, so it is kept in a crate authentic to the time period. And if you are keeping beer or soda in the cooler, it must be poured into and drunk from an authentic vessel, like a canteen. All participants pay for their own gear, which can get real pricey, but loaner gear is available to anyone who just wants to try an event out. If someone likes it and wants to commit to future reenactments, he has a year to get his kit together. Jake doesn’t do these public events much anymore, although there are plenty of folks who do and who really love them. It’s a weekend away, a weekend out camping with a large community of like-minded people. And they’re historically valuable.

The other type of reenactments are private, closed to the public, and this is a vast world I had no knowledge of until I interviewed Jake. These events take place over the course of as many as ten days, “and by the fourth or fifth day, guys are really into it.” The battles at these are largely unscripted, although there are some very scripted; for instance, Jake does one in Pennsylvania every year that emulates the Battle of the Bulge. The rules of engagement are simple. You fight, and if you’re “killed,” you have to lie on the battlefield until that action is over. Then when the battle is over, you fall back a hundred yards or so and wait in a “dead pool” for ten or so minutes until you come back in, like a reinforcement. There are medics on the field, and they are often real medics getting training. Every now and then there is an actual injury, often something with the hand, at which point all participants shout, “Real world, real world,” and all action ceases until the injured person is tended to.

Over the years, Jake has concentrated on two types of reenactments—World War II, in which he’s usually a German but will also be a Russian, Japanese, Partisan or American G.I., and the American Indian wars of the latter 19th century, in which he’s a Native American. “The Indian Wars are the most fun because they’re the most wild. Most times, no night action is allowed because it’s so dangerous, but during the Indian Wars we’d always do two or three nights of action, usually us sneaking up on the cavalry camp and capturing their horses.” The events take place in Wyoming on BLM or State lands or on a ranch, and the battles are fought on horses with both camps spending the night at least five miles apart. I asked Jake who participates in these, and he said, “A variety of people. There are a lot of history buffs, there are a lot of people interested in living life as a Native American, and there are a lot of Europeans. Germans are obsessed with the American West and its history.”

The World War II actions can get incredibly elaborate; some guys come with armored cars and tanks, which are quite expensive, “but it’s fun to have a tank there.” Because it is World War II, one side has to be German, but Jake says, “It’s important to note that we’re not reenacting the politics of the era.” Quite the opposite, in fact. “We go out of our way to keep Nazis and skinheads out, and nobody is allowed to say anything remotely racist or anti-Semitic.” Jake says that the people doing these events, while they may be geeks, are not dummies, and that the whole experience is a deep immersion into history which requires deep study beforehand. I asked if that’s why people did this, and he said, “Partly, sure. But there are other reasons. We have a lot of vets who come right after they leave the military. I think it’s therapeutic for them in a way and helps them transition to civilian life. It’s also a great way to leave the world behind—the bills, the job, whatever. You’re completely cut off for three to ten days. And then there’s a camaraderie that’s appealing. In our disjointed world where everything is so impersonal and transient, nights around a campfire with a group of people can give you a sense of community. Some of the guys I do this with I’ve known for almost 50 years.”

I asked Jake if that’s why he did this, that sense of community, and he acknowledged it was, but there was something more. “Frankly, from day one I’ve wrestled with why I find these actions appealing. I’m a kind-hearted person, and I’m fascinated by how governments and societies can convince people to go to war, given how truly awful it is. I’ve never hurt anyone, I have no desire to, but I’m good at these reenactments. Being good at war is a horrible talent to have. I think that instinct of violence and conflict is in most people, and in some it has to be beaten down. Beyond the historical value, I do these reenactments to understand that instinct in me and others.”

That was a deeply interesting and intelligent response I was not expecting, although I probably should have been given that I know Jake to be an intensely thoughtful, intelligent and compassionate guy. I have spent time in a teepee he made with hand tools out of the hides from animals he hunted. I’ve done a sweat in an edifice he constructed in remote Colorado, again by hand, cooling off in the rushing river nearby. I’ve listened to him speak at great length about ancient samurai weaponry, Oglala spirituality and daily life among Scythian societies circa 1000 B.C. The dude is sharp. Yes, reenactments might seem odd to those on the outside, but a great many things seem odd to outsiders; I still don’t get all the excitement at the NFL draft, Roy Lichtenstein’s paintings or the opening day of deer-hunting season, quite possibly the holiest day of the year in my hometown. I’m sure reenactors also draw their fare share of snark, but that must surely come from narrow minds, folks who, to crib from Stegner, “made a straight A in irony—that curse, that evasion, that armor, that way of staying safe while seeming wise.” And no doubt there are some who oppose its war-like nature. Well, maybe, but I honestly don’t see it as glorifying war or bringing us any closer to declaring one. I admire these reenactors in the same way I admire anyone with an active and intelligent hobby, like my friend Tom, an avid birdwatcher, or my friend Bob, who every year taps trees and collects sap to make maple syrup over an open fire in his back yard come mud season. It is all time well spent.