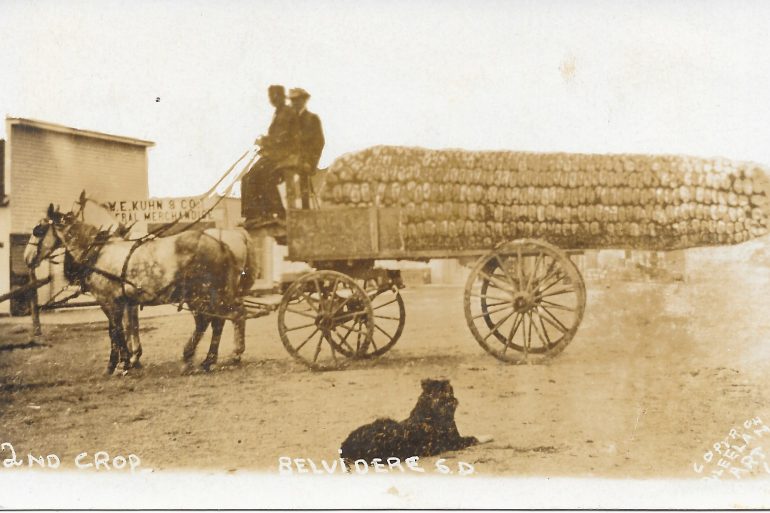 By the time Cynthia Elyce Rubin had finished the renovations in her Manhattan apartment on the Upper West Side, acting as her own general contractor as she tore down walls and made two tiny apartments into one, she hadn’t thought about her postcard collection in a while. A student in folk art, in fact the first person to receive a Ph.D. in the field from NYU, she’d moved to the city years before with a collection she’d begun while living in Boston, near her hometown of Lowell. They were antique postcards from the early 1900’s, most of them comprised of negatives of photographs of happenings big and small—a burning building, a derailed train, a family dinner outdoors on the plains. At the time, collecting these types of postcards was all the rage, families keeping them, as Rubin notes in one of her articles, “in Victorian albums as ubiquitous as the family Bible.” Nearly a century later, Rubin had amassed her own collection, and in her newly renovated New York apartment she decided it was time to pull them all out and spread them on the floor and look at them again for the first time in years.

She divided them by category, and many belonged in what she called her “Americana collection,” postcards featuring life in the Midwest where a profusion of photographers, as many as 2000 in South Dakota alone, made extra money chronicling the happenings of their time and place. She had an ample supply of pictures that included corn. Back in Boston, she’d published a handful of cookbooks, and in anticipation of writing another featuring recipes with corn, she’d begun hunting and buying postcards that had corn in the picture. “Many of them included exaggeration, or tall-tale, postcards, such as a person with a giant ear of corn. It was a way to demonstrate success as a farmer. They would also have their picture taken in front of a cornfield, next to the tallest stalk, which sometimes might be a foot taller than the rest.” Rubin noted that today, because of GMO’s, you no longer see that outlier of a giant stalk.

As she sorted, one corn postcard, however, leaped out at her. It was of a man in a bowler hat and Sunday finery kneeling before a cornfield, arms full of corn. Below it was the handwritten caption: “The Homesteader’s Bouquet.” Rubin was transfixed and overawed. “This postcard captured what that whole time was about,” she said—the Homestead Act, the influx of people to the plains to start life anew, the farmer’s most important crop which was the essence of optimism and hope, America’s bounty, the American dream, all of it in one picture and three words. She placed that postcard in her pile of favorites and noticed that she had four others just like it meaning with handwritten captions. “I noticed that those five had the same photographer’s name, and that shocked me because I’d purchased them in completely different places and at completely different times, over the course of years.” The photographer’s name was O.S. Leeland. Rubin gave chase.

She called the dealers from whom she’d bought the postcards, but none of them had any idea who O.S. Leeland was. One postcard had Leeland’s business address listed; it was in Mitchell, South Dakota, a town Rubin became very familiar with in graduate school when she took a course on folk architecture and had to give a presentation. She chose the subject of corn palaces, specifically the five in Sioux City, Iowa, built from 1887 – 1891, and the one in Mitchell, originally built in 1892; the one Rubin presented on is a different corn palace, and the current one in Mitchell now is the only one left standing. These were examples of “crop palaces” built in towns and cities across the Midwest in the late 1800’s to advertise the benefits of those local communities, thus encouraging others to move there. The original Corn Palace in Mitchell was a wooden structure built to look like a castle, and O.S. Leeland took many photographs of it. Anyway, seeing that O.S. Leeland’s business address was in Mitchell, Rubin called the South Dakota State Archives.

The woman who answered said that there was nothing in the data base with the name of O.S. Leeland, but she said that for fifteen dollars she would do an hour of further research. Rubin sent the check and essentially forgot about it, but two months later she received a manila envelope from the archivist in South Dakota, and inside were pages from the national census, the state census and official Mitchell Business Directory. Turns out O.S. Leeland, whom Rubin had assumed was British because of that last name, was the Norwegian immigrant Ole Sigbjornsen Liland, the spelling of that last name Americanized when he went to live with his brother in North Dakota. “I was shocked,” Rubin said. “I thought he was just some Boston photographer come west.”

Rubin knew there was a Norwegian-American Historical Society in Northfield, Minnesota, so she called it and asked if anyone knew of Leeland. (This was before the advent of Google when searching was easier but finding far less rewarding.) No one did, but archivist Forrest Brown did some sleuthing and discovered a 1939 obituary in Skandinavan, Chicago’s Scandinavian-language newspaper. He translated it, and Rubin used the information to not only fill in gaps but also further her quest. She traveled to Mitchell where she met a distant relative of Leeland’s who had responded to a classified ad that the Mitchell editor placed to assist Rubin; interestingly, Rubin never asked for the ad, and Leeland’s relative, Oscar Thompson, said the only time he’d ever read the classifieds in his life was that one day. Thompson and Rubin met at the cafeteria of the local supermarket, and he showed her the dozen or so photos Leeland took of his family. She even traveled to the small town in the mountains of southern Norway where Leeland emigrated from and met some of his relatives who told her all they knew of the immigrant who’d gone to America and thrived. She suffered a pang of deep anguish upon learning that Leeland had written hundreds of letters home but that no one knows where they are or even if they still exist.

It was through things Norwegian that I came to meet Rubin myself. She is currently an editor at The Norwegian American, North America’s only Norwegian-American newspaper. She edits the travel section, and I contacted her with a few story pitches in the hopes that I will be traveling to Norway this summer, provided I find the money (not looking good). In the course of our e-mails we got onto the subject of folk art, of which I’m also a fan, and she introduced me to Ole. I became fascinated and arranged for a phone interview. (Incidentally, my mother was Norwegian, and some of the relatives I would visit this summer live in Tonstad, which is where Ole’s family originates.)

“But what obsessed you about Leeland?” I asked Rubin over the phone. “You have thousands of these postcards from hundreds of photographers. What about him was so different?”

“I love the juxtaposition of a caption intermingled with an image. I know of no other photographer who does that, post card or otherwise. And he manages to capture life on the homestead in such a humorous way. There were thousands of photographers all over the Midwest doing what Leeland was doing, taking pictures of towns being incorporated throughout the Midwest. In many ways he was a very normal, small town guy. But no one was doing anything like him.”

Rubin cites one particular postcard of a farmer advertising for a wife. It was a significant issue in those earliest homesteading days, the lack of women out there on the plains, specifically single women. “It was a big problem,” Rubin says, “but no one captured it so succinctly on a postcard quite the way Leeland did.”

Many of Leeland’s postcards focused on the role of women in that society, not only humorously but also progressively. Rubin became especially aware of that when, after delivering a lecture in Texas to the Society for Photographic Education, the editor of the affiliated journal asked her to write an article about the women in Leeland’s postcards. One of my own favorites of the few I’ve seen is of two women in long-sleeved dresses sitting outdoors on the ground doing domestic chores with, behind them, their tarpaper, sod-banked home. Leeland’s handwritten caption is “Two Wise Virgins.” That picture so succinctly expresses a multitude of messages which Rubin delineates in that Society journal essay. Rubin’s personal favorite is Leeland’s comment on women’s suffrage before they’d yet secured the right to vote. (Caption reads: “The American Woman.” At home in any field of Labor. But–she can’t vote.)

Rubin has a website where you can go read these articles and see more of Leeland’s work in the articles: http://www.cynthiaelycerubin.com/. She is currently at work on a book about Leeland, and she has in her possession hundreds of his photos and postcards; I pray some museum director somewhere is wise enough to see the immense value of curating an Ole Leeland show. It would be sublime, and fitting, if said curator connected to Rubin through this article, for this story is ultimately about unlikely connections and how they are possible across landscapes and generations if only we avail ourselves to them. Today, we know of O.S. Leeland and his work because Cynthia Elyce Rubin connected with him and pieced together the clues and wrote about it. It was not entirely happenstance; in a sense, Leeland willed it. That postcard that initially drew Rubin down the rabbit hole of his life and art, “The Homesteader’s Bouquet”—years after she first focused on that picture in her newly renovated Manhattan apartment, she discovered that the homesteader holding the corn was none other than Leeland himself, who likely took the picture with a tripwire. “The way he’s staring out,” Rubin said, “it’s as if he’s saying, ‘Here I am. Come find out my story.’”

To our immense great benefit, Rubin did.