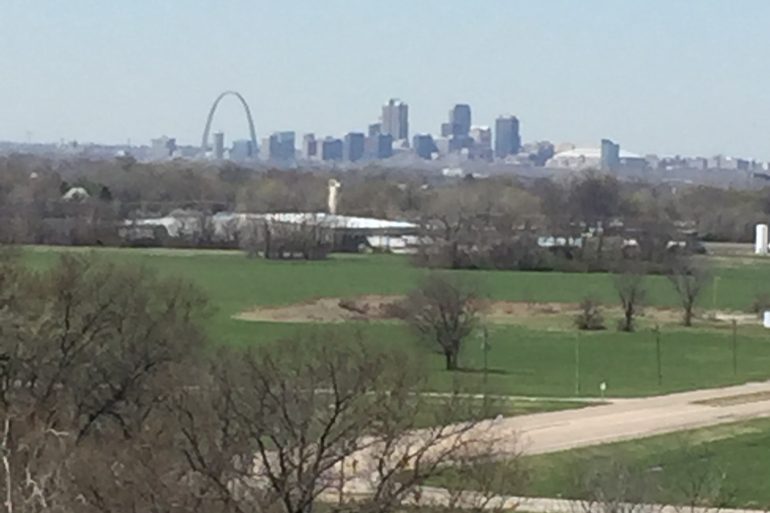 The Mounds and The Arch

I grew up in southern Illinois, near St. Louis, so I went to the Arch dozens of times, but I never went to Cahokia Mounds. The Arch is an amazing architectural structure, and the view from the top is remarkable (even if it is a little unsettling on windy days when you can feel the Arch slightly swaying), and underneath is a fine museum dedicated to Lewis and Clark and their journey; along with artifacts and large dioramas there are artfully featured excerpts from the journal of Merriweather Lewis, a mesmerizing writer, definitely the artist of that trip, a poet’s soul never quite belonging wherever he was, which was why he must have craved movement and long journeys; a few years after this epic trip he died on the Natchez Trace down in southern Tennessee, gunshot wounds, whether by suicide or murder it has never been conclusively determined.

The Arch also has a movie of its making, which took two years. I’d assumed they just started on one side, built up to the top and came down the other side, but in fact they started on both sides and worked their way up to meet in the middle, which still strikes me as incredible. I recall from the movie that it was a hot day when they put that final piece in, and they had to keep hosing it down—stainless steel under a summer sun. So yes, an amazing architectural feat about an hour from my childhood home, but truly no less architecturally marvelous are the Cahokia Mounds also about an hour from my home and built one thousand years earlier by a Native American society that thrived and prospered and grew to 20,000 before essentially just vanishing around 1350, long before the Europeans came and began their slow-roasting slaughter of Native Americans. It’s an endless source of amazement to constantly hear fellow citizens claim our country was founded upon Judeo-Christian principles despite the fact that it was solidly built on the practices of genocide and slavery.

“Why did we never go to Cahokia Mounds?” I asked my eldest brother over the phone just a couple of years back, right before I did travel home and, at long last, go see them, along with my son, my brother’s kids and, of course, my brother, a minister in nearby Vandalia, which was Illinois’ first capital and the place where young Abe Lincoln represented Springfield as a State Representative.

“I have no idea,” my brother said.

I recently called a close friend back home, a former English and History high school teacher who is smart and cultured and well-traveled, an avid reader and amateur chef who has been my travel companion on not a few of my American journeys. “Spatch,” I said, because that’s his nickname, “have you ever been to Cahokia Mounds?”

“Oh, years and years ago, I chaperoned a field trip there, but my memory’s pretty hazy.”

“And you haven’t been since?”

“Do you know anybody who has been?”

“Can you think of any teachers at any grade level who are teaching about this place or taking classes on field trips?”

And that’s amazing, because what we call Cahokia Mounds is the largest prehistoric site north of the Rio Grande. It’s America’s Machu Pichu, its Chichen Itza´, and I grew up less than an hour away and never went to see the place. The largest mound, known as Monks Mound—100 feet high, 1000 feet long and 800 feet wide—is the largest Precolumbian earthen construction in the Western Hemisphere. It is so large that a number of explorers, such as Lasalle, Marquette and Joliet, floated right past and didn’t even notice it. The first visitor finally to see it and write about it was Henry Brackenridge, an early 19th century scholar interested in ruins and mounds. “What a stupendous pile of earth,” he wrote to his friend, Thomas Jefferson, in 1811. “When I arrived at the foot of the principal mound I was struck with a degree of astonishment, not unlike that which is experienced in contemplating the Egyptian pyramids. To heap up such a mass must have required years and the labors of thousands.” But the local citizens were just as uninterested then as now; Brackenridge wrote about his findings in the St. Louis newspaper, and they “attracted no notice.” (All information about Cahokia Mounds in this article comes from Biloine Young and Melvin Fowler’s marvelous text Cahokia: The Great Native American Metropolis. The book details all that is known about the archaeology, enthography, history and culture of the place as well as the heroic efforts of professional and amateur scientists and historians to save the site from destruction and development.)

Because the land of the site is flat, Mississippi bottom land, we could see Monks Mound from a fair distance as we drove to the park on a warmish day in early spring. It is simply massive. And from the road, it was easy to see many of the other dozens of mounds at the state historic site. The society that lived there built three kinds of mounds: the most common was a platform mound, basically a pyramid with a flat top, and many residences were constructed atop these platforms, wood huts with a grass roof. The second type of mound is the ridge-top, which is a rectangle that rises on all sides to a narrow ridge on top, looking like an old-fashioned wagon full of hay, which is why it’s also called a “hayrick” mound; these were used as markers, denoting peripheries or other important sites in the community. Lastly, there are conical mounds, some of them still impeccably preserved, such as Round Top Mound, which is 40 feet high and 80 feet in diameter at the base. These, it appears, are mostly burial mounds, and that brings up the debate that often comes into play in archaeology, that of desecrating sacred ground. After much deliberation and consultation with Native Americans, the scientists at Cahokia proceeded with excavation because the ancient tribe that lived there could not be linked to any latter day or current tribe.

Personally, I think there’s a statute of limitations on these things, say 500 years, but then I’ve always favored cremation and never understood how a site of bones and trinkets could be sacred when it’s our souls and spirit that make us who we are. Bears and wolves have sacred spirits, too, but that doesn’t stop anyone from using their pelts for warmth and bones as tools. Just outside of Rome, along the Appian Way, there’s a marvelous underground catacomb of many tunnels and rooms where hundreds of early Christians were once buried. These catacombs were discovered in modern times, and I was downright giddy that they’d cleared out all the bodies so I could take a tour there, at no point feeling I was desecrating some place sacred. If you told me that tomorrow, you were digging up the graves of my mother and father, I’d yawn. No doubt I am more cavalier than some on this, and I can sympathize with leaving burial sites that are less than five hundred years old alone. But anything older than that is fair game in my book.

Monks Mound is a platform mound, and on top was the home of the big chief. Of course. It should come as little surprise that the grandest mound was for the leader’s home, given that in the Bible, King Solomon himself spent six more years building his palace than he did the Temple. (Reports of his wisdom are vastly exaggerated.) It contains four terrace levels, and the current concrete stairs leading to the top follow the exact path of the wooden stairs a thousand years ago. It was as I climbed to the top that I gained a real appreciation for just how massive and impressive that man-made mound was. Machu Picchu is more complex and ornate and is set among a severe, arresting landscape high in the Andes Mountains; Chichen Itza´ is all brick and stone and set in the exotic jungle landscape of Mexico’s Yucatan Peninsula. Meanwhile, Cahokia Mounds is comprised of grassy hills on a flat expanse of the boring American Midwest. So I understand, in a way, why it has not gotten the press that some of these other ancient communities have. But the place is fantastic, and as you climb Monks Mound, it is incomprehensible to consider what it took to build it, an infrastructure project that became even more impressive when I read that the Natives alternated soils in the rising layers to strengthen its support.

The top was no less awesome—a vast flatness large enough to encompass many football fields. I looked out and saw the green acres of the historic site and the many smaller mounds. I saw the brown building that houses the terrific museum on site, complete with an instructional film, artifacts, life-size dioramas of village scenes and a terrific gift shop. And, in the distance, I saw The Arch, a crystalline view of one millennium’s architectural wonder from the top of a preceding millennium’s architectural wonder. It was a semi-mystical view that linked two human societies separated by a thousand years, revealing yet again that no matter how much the forms of our world might change, the underlying content is essentially the same, and human beings over the millennia go remarkably unchanged. Researchers don’t yet know what happened to this community. For many hundreds of years there was an entire mound-building society throughout the eastern half of the current United States, stretching from Red Wing, Minnesota, down to eastern Texas and over through Moundville, Alabama, to Etowah, Georgia. But Cahokia was, by far, the largest of the communities. And yet, one day, it was gone. While it had a wooden palisades for the purpose of defense, there’s no evidence that it engaged in any war. It appears these communities at one time traded heavily but never did fight, which is refreshing. And while they had a sophisticated understanding of science, engineering, agriculture and religion, they still failed to find the secret to continued existence, certainly a cautionary tale for our own society. As best as researchers can deduce, the community simply dispersed, families and clans all going their separate ways, some of them no doubt becoming ancestors of latter day tribes but researchers unable to decipher which ones.

As familiarity can breed contempt, proximity can breed indifference. Too often we overlook those incredible things closest to us. No matter where you are in America, there is something less than an hour away, at most two, that is remarkable. For me, growing up, it was a cornucopia, really, The St. Louis Arch, the courthouse where Dred Scott was tried, Mark Twain’s home in Hannibal, the Mississippi River itself, and Cahokia Mounds, just to name a few. For whatever reason, I ignored Cahokia for too long, as are so many who are living near it now. No matter where you live, don’t ignore what’s near you. And if you get the chance, don’t ignore Cahokia Mounds.