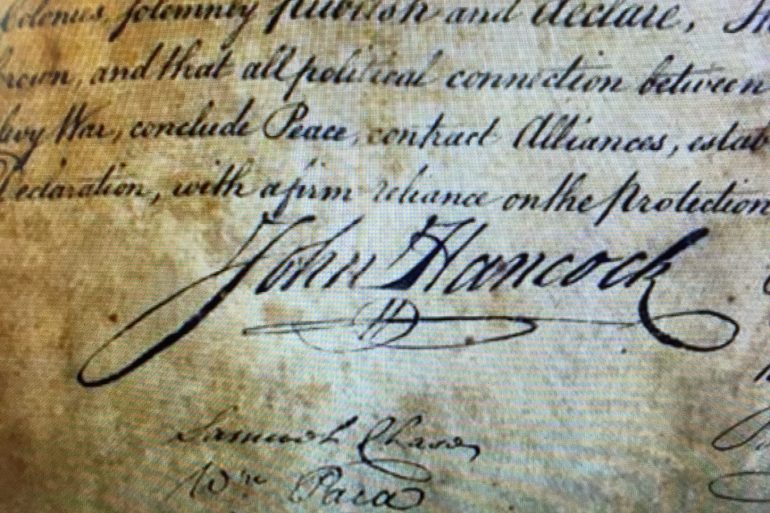 John Hancock. Patriot, revolutionary, President of the Second Continental Congress, first and third Governor of Massachusetts. Also a Mr. Big Bucks, one of the richest men in the original thirteen colonies. Like many of our super-wealthy, he didn’t do diddley to earn that fortune but rather inherited his uncle’s mercantile business. Thus, perhaps it shouldn’t be a surprise that he wrote his signature so famously large on the Declaration of Independence. Perhaps, like so many who inherit their money, he spent the rest of his life trying to prove his manhood and worth (someone else comes to mind on this, an American leader though not necessarily patriot from a later age). And so perhaps it should have come as no surprise that this is Mr. Big Signature’s tombstone: Actually, I have no idea what kind of person John Hancock was, but that kind of intro lent too beautifully to that tombstone for me to forego. Turns out, most people, even historians, have very little idea what kind of person Hancock was because he didn’t leave behind a ton of personal writings, and when he died, he was buried in an unmarked grave and shunted onto a dustbin of history. He remained mostly forgotten, or ignored, for many years, largely because, according to one historian, the new-money folks of Massachusetts didn’t want it getting out that a really rich person was willing to give his money for the cause of the Revolution. This would be much less of a concern today now that untrammeled greed in America has come to be regarded as a high form of patriotism. But eventually the unwashed rabble won out, and in 1896, a group advocating on behalf of reviving John Hancock’s memory through a memorial got their wish.

But honestly, what was the memorial committee thinking? Could they not see what this obelisk looked like? I mean really looked like? Was the committee comprised of virginal women who did not know better, or perhaps aged, impotent men whose memories of their lustier youth were too dim to envision? Truly, the shape is so obvious that it’s difficult not to think that, for whatever reason, it was intentional. Maybe a Hancock descendant was on that memorial committee, and it was his or her revenge on the new-money snobs eager to bury the great man’s legacy.

The grave is found in Granary Burying Ground, Boston’s third-oldest cemetery and one of my favorites in the country, along with Greenwood Cemetery in Brooklyn and Calvary Cemetery in St. Louis, a real gem with everyone from William Tecumseh Sherman to Tennessee Williams to Dred Scott. Granary abuts the Park Street Church, which wasn’t there when the cemetery was first established—a granary building was, thus the name. It has a dazzling array of dead, including, but not limited to, Samuel Adams, Paul Revere, and Samuel Sewell, the only judge at the Salem witch trials to later recant his role. (Interestingly, only the judges who never recanted or even hinted at wrongdoing were able to further their political careers, thus proving that America has a long and rich tradition of voting for heinous pricks who never apologize for their sins and crimes.)

There are also two notable African-Americans in this burying ground: Crispus Attucks, the only black among the five killed in the Boston Massacre (fascinating how, in those days, the gunning down of five was called a massacre whereas these days the gunning down of five would be called Tuesday afternoon); and Phyllis Wheatley, the slave who became a renowned poet and the first African-American woman to publish a book. There is also the bulk of Ben Franklin’s family and plenty of other historical notables. I’ll give a final mention to Peter Faneuil, the guy who gave the money to have that famous building constructed in Boston, Faneuil Hall, a place that no one outside of Massachusetts has any earthly idea how to pronounce and so finds him or herself mumbling that second syllable when forced to try.

I visited the famous burying ground during the day as a goofy tourist but also at night on a ghost tour. Ghost tours have become one of my favorite things to do almost everywhere I go, and I am giddy that they’re being established in an increasing number of cities. Sometimes a city really has to stretch to generate enough haunted content, but the Boston tour is pretty solid. Fair warning: when you get to Granary Burying Ground on your ghost tour, do not, DO NOT, sit on the Samuel Sewell grave, as my unfortunate son so woefully did. And when you get there day or night, do not, DO NOT, try to reach out and touch the Hancock tombstone. There is simply no way to do so without looking like a slut.