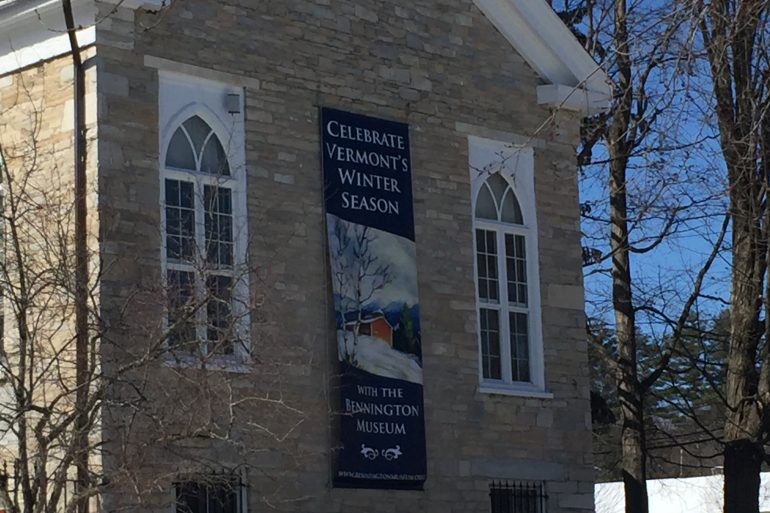 Grandma Moses and the Bennington Museum

Before we get to Grandma Moses, I need to make a public service announcement: If you are driving to Bennington, Vermont, from the west, once you hit Hoosick, New York, you will be told that in that village you can visit a home, not the home but a home, of Chester A. Arthur, America’s 21st president, a portly type who assumed the presidency after the assassination of Ohioan James Garfield and, in so doing, gave new life to his career and the mutton chop. If you actually want to visit that home, you better come with coordinates already mapped. If you put “Chester A. Arthur Home” into your GPS, you will get his New York City address, even as you’re driving through Hoosick three hours north. And if you’re counting on a local to be able to tell you where the house is, good luck finding one beyond the fellas working at Big Moose Deli. But all was not a complete loss. While the Big Moose employees couldn’t provide directions to Chester A. Arthur’s home, they did provide a lovely pulled pork sandwich and a sumptuous array of baked goods. The Big Moose Deli is a sort of Spencer’s of souvenirs and food, hawking everything from kitschy wood carvings to ceramic hens to soft drinks in flavors that include Bacon with Maple Syurp, Buffalo Wing, Kitty Piddle, Dog Drool and Bug Barf. I’m putty in the face of gift shops and souvenirs, so I could have spent days in that place, but I was there only long enough to eat my pulled pork, buy a pie, and find out no one knew where Chester A. Arthur’s home was. (Incidentally, Chester A. Arthur is always mentioned with that middle initial, as if there are numerous other Chester Arthurs we might confuse him with. The A. stands for Alan.) But on to Bennington!

The Bennington Museum is a beautiful stone structure built as a Catholic Church in 1855 but converted into a museum in 1928. It is a terrific place focused on the art, history and culture of southern Vermont. Near the entrance is a statue of Abraham Lincoln, and it bears an odd resemblance to the statue in front of the Witch Museum in Salem, Massachusetts: The statue in Salem is often assumed to be a witch but is, in fact, Roger Conant, the founder of Salem who, as a Puritan, was no doubt pissed off about something when he left his old village and formed a new one. I’m as big a Lincoln fan as there is, but I find the sculpture at Bennington a tad unsettling, largely because of the nude figures before him. Now, there’s an artistic reason for this, which you can research on the Bennington website, but even with that knowledge the sculpture is . . . unsettling.

Not so the Grandma Moses paintings inside, nearly a dozen of them in a room dedicated just to her. In fact, a Grandma Moses painting is the antithesis of unsettling, which must certainly be a major factor of their appeal—farm and village scenes in all seasons that evoke nostalgia for a time we all think of as easier and better but wasn’t. Ask farmers from the Depression how charming and idyllic the Thirties were; ask black people how pleasantly wonderful life was in the Twenties, when lynching was still rampant and almost everything was segregated; ask Jewish and Irish immigrants how grand were those tenement and sweat shop days of the early 1900’s. Maybe there was something simplistically beautiful about a Vermont village scene in 1890, but I think there’s something simplistically beautiful about a Vermont village scene today, and unlike in 1890, we have novocaine and anesthesia. But nowhere in the paintings of Grandma Moses is there even a whiff of life’s ugly realities, as if they didn’t exist back then. Even her painting of the Battle of Bennington makes that vicious skirmish of the American Revolution look like a cheerful outing of wholesome country boys participating in some frolicsome fellowship and good-hearted roughhousing.

I first heard of Grandma Moses all the way back in the fifth grade, and the emphasis wasn’t so much on her art as her narrative—the hearty lass who took up painting in her seventies and became world famous. It was ultimately a new take on the old Horatio Alger myth that you can accomplish anything if you just try hard enough (a myth belied by the fact that millions upon millions of Americans work their asses off for years and still struggle just to accomplish basic expenses), and I’m not so sure that isn’t why the story of Grandma Moses was fobbed off on us. I say all of this because charming and delightful as I find her paintings (and I do; I could have stared at them all day), let’s be honest: Grandma Moses really isn’t that great of a painter. In villages and small towns all across America, any number of ladies over fifty are taking painting lessons from some local artist, and I bet thousands are every bit as good as Grandma Moses. The old gal was the beneficiary of some terrific PR, which could be why the Grandma Moses room at the museum features a constant loop of her 1955 interview with Edward Murrow on See It Now. Again, I loved looking at her paintings in a room so perfectly curated, but if Anna Mary Robertson Moses had done those paintings when she was forty and not eighty, my hunch is we wouldn’t be talking about them today.

Yet the Bennington Museum is about more than just Grandma Moses. There’s a fabulous room dedicated to Gilded Age Vermont, which includes paintings, furniture and an old auto; there’s a room overflowing with remarkable Vermont pottery; and there’s the Sloane Gallery, which was the room dedicated to the Battle of Bennington that includes muskets, a cannon from the battle and other relevant artifacts. It also includes this large mural by Leroy Williams, commissioned through FDR’s WPA, which hired artists across the country to paint. Williams strove for historical accuracy, researching for five years, and he sought to depict actual figures from the battle as accurately as possible. Many of those figures are listed by name on a description of the painting nearby, and some are listed just generally, such as “British Private of Light Infantry,” or “New Hampshire Private.” I mention this because it was my twelve-year-old son who, with gales of laughter, noticed one person who was not named and the only person on a horse to go unidentified. See if you can notice what might distinguish him from the others: Speaking of Bennington and blacks, the museum also has a few pictures and artifacts of Lemuel Haynes, a Revolutionary War veteran and Congregational Minister who was the first African American to be ordained in America. One picture, painted in 1939 by William Tefft Schwarz, shows the reverend preaching to the congregation at the Old North Church in Bennington. (My photo is fuzzy). Two things. Were blacks allowed only in the back of the church, as if it were a Montgomery bus? I ask because never before have I seen the minister’s pulpit behind the congregation. Second, it’s clear from this picture that just because they ordained him didn’t mean they were going to listen to anything he had to say.

Finally, the museum has some marvelous 18th and 19th century portraits of wealthier Vermont citizens, and apparently in those days, children were raised to look like adults as soon as possible. All joking aside, I loved the Bennington Museum. It truly is a marvel to me how many great local museums there are across our country, not good but great. They’re testimonies of excellence by people decent and smart enough to care, and we are fortunate to have so many of those kinds of people.