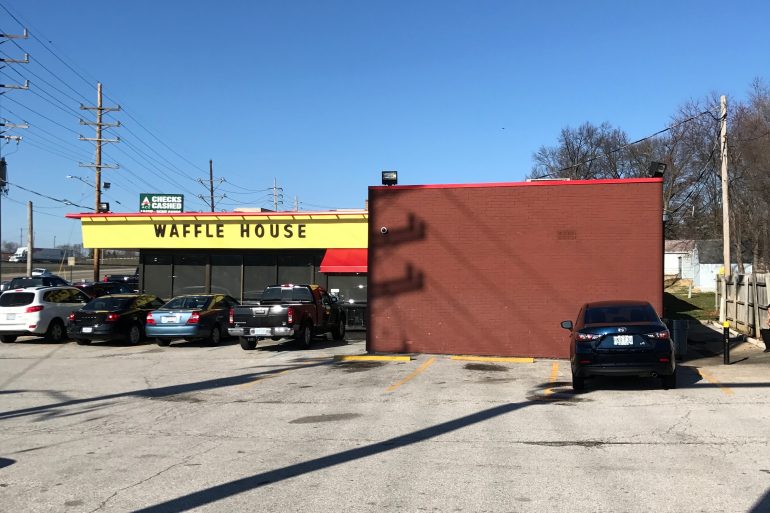 Things happen at the Waffle House.

A few days ago, a man was shot inside a Waffle House in Norfolk, Virginia, and a couple days before that, in Crowley, Alabama, a man crashed his car into the Waffle House before leading police on a car chase.

Also this week: two men in Florida who’d been shot at in their car drove to the local Waffle House for help, and in Memphis, a brawl broke out in the Waffle House.

Last month at a Waffle House in Georgia, a man was arrested because he desperately wanted some barbecue sauce, and that Waffle House didn’t have any. The police arrived just before it came to blows.

In December in South Carolina, a drunken customer entered a Waffle House while the lone employee was fast asleep, so the customer went behind the counter and cooked himself a Texas bacon cheesesteak melt. He took selfies and posted them. Initially he didn’t pay for his sandwich, but he did come back later in the day to settle up.

As I said, things happen at the Waffle House.

My things revolved around a cycle of love.

New love: fresh, exhilarating, all-consuming; among the best things in the world. Tracy and I had been circling around it for a year, both of us students and wanting to dive fully in, me an English major, she a wildlife biologist with a specialty in birds of prey. She had her reservations because I was someone to have reservations about in those days, but finally those were lifted, and we committed. One late night, which is a usual time for new lovers, we were at the local Waffle House in Swannanoa, North Carolina, a forgotten step-sister of a town in the Smokey Mountains between famous big sister Asheville and precious little sis Black Mountain.

It was crowded though almost midnight, I think because a David Allan Coe concert had just let out down the road. We sat in a booth on the corner where the booths took a ninety-degree turn to the right, and caddy corner to us was a young couple close enough that I could hear too much, she thin and pretty with long dark hair, he a shade older but also young, blue jeans and black shirt pulling at the seams because he was probably forty pounds heavier than when he bought that shirt, his chubby face pale under his black cowboy hat. They were breaking up. A few feet away, a marriage was coming to an end.

She did not look distraught. She looked like she felt bad to be hurting him, but she wanted this marriage to end. He was waylaid. “But I gave you everything I had,” he said at one point, a tired cliché, but it didn’t sound tired coming out of his mouth that night; it wasn’t forced. It was something he meant, and he said it with meaning. He was not happy to be losing his pretty wife. But the thing that really caught my eye: throughout the entire breakup, which started before we got there and was still happening after we left, and we sat there a while because that’s what new love does—it dawdles and luxuriates and decides to have dessert and is in no hurry to go anywhere; but throughout that entire breakup, the young man in the tight-fitting shirt kept ordering more and more food, first an omelet with potatoes and toast, then some steak and eggs, then some pancakes, then a tuna melt with cheese, then I don’t know what else because we finally left, but he was still eating, still ordering. He may have been devastated, but his appetite was fine. His marriage was ending but it was no reason not to eat. Amply.

A few months later we were back at the Waffle House, a rainy and chill November night full of that Smokey Mountain autumn smell of nature so abundant it verges on sweet decay—the fallen leaves, the fecund soil, the moist air, the whiffs of pine. It was a giddy night because I was soon to graduate, and we’d just decided that I would join Tracy when she moved in January to Boise, Idaho, where she’d landed a job working with peregrine falcons. The Waffle House was empty, caught in those hours after dinner but before the drunks left the bar, and our waitress was able to give us her undivided attention. Which she did. Oppressively so. Thin, in her forties, yellowed teeth and a smile that must have been incredibly pretty not that many years before, she would not leave our table after she took our order and shouted it to the cook. She lingered long enough that Tracy and I finally stopped talking, not wanting to be overheard even though we had nothing of significance to say. We stared at each other awkwardly.

“So how y’all doing tonight?” our waitress asked, a raspy twang.

“We’re doing good,” we said, nodding, and we were.

“You know the other night they found someone out in the dumpster back here. He was murdered and thrown in there.”

We did not know that; we expressed alarm. It wasn’t terribly strange that we hadn’t heard because any local news we might have caught would have been about Asheville. It must have been in the paper, on the radio, even local TV, but we missed it, no doubt in part because we were college kids and newly in love so pretty much the apotheosis of self-absorbed.

“Yeah,” our waitress said, “it wasn’t good. The person who was murdered was my son.”

It was odd the way she just charged right into that, but no odder than the fact that she said it at all, no odder than the fact that it happened. What on earth do you say to that? You say you’re sorry, and you mean it, which we did, over and over, but such a strange thing to hear, and she so passive about it, blasé even, but ultimately not blasé, really, probably just tired and resigned to a life given an unfair amount of difficulty like most low-income lives are. She did not cry; her voice was not quaking with any kind of emotion. She simply came across as someone caught between disbelief and exhaustion, someone who wanted to share her pain, as if, perhaps, she really had no one else to share it with or not enough people to share it with—pain spread is often pain diffused. We did not ask too much about her son. We did ask after her welfare and the state of the investigation. “They don’t really know who did it and I don’t really either. Couldn’t really say why it happened.” Our food was ready so she served us and then left because some other customers did come in. We left an exorbitant tip and were sure to say good-bye on our way out. We never saw her again.

It’s probably not compete chance that over and over things happen at the Waffle House; the place is conducive for such things, an ongoing opportunity as golden as its sign, open as it is all night and therefore beckoning a certain clientele that you never see, say, at a Bob Evans, a Denny’s or a Cracker Barrell. Families go to those places; sober people go to those places during regular eating hours; in all the times I’ve been to a Waffle House, I don’t recall ever seeing a family of two parents and kids. Lots of couples, lots of drunks, lots of young people together and older people eating alone. Lots of people who struck me as folks just looking for someplace to be as much as somewhere to eat.

I came back to that Waffle House in Swannanoa a couple of years later. Love with Tracy had run its course ending where most loves usually do, and I was a maudlin and morose sap just looking for a day that didn’t hurt. It’s nothing now all these years later, of course, that broken heart, and it pales in comparison to the memories of the good times with Tracy, but even those have mostly faded. Knowing I was bereft and unlikely to find my footing as long as I was out West, a region I never quite took to, a friend called me back to Carolina with the offer of a decent gig. I took it, and every night those first few weeks I was at the Waffle House, nursing my hurt, playing over and over a song on the juke box, “The Dance,” by Garth Brooks, a schmaltzy pile of crap that passes as country but still punches my chest every time I hear it even to this day. It got to where the waitress every night played it for me, took a quarter from the small stack I kept on the table and punched those buttons. (I was easily that year’s winner of Waylon’s “Wurlitzer Prize;” go give it a listen.) She was an older lady, this waitress, and I saw her most every night for weeks.

“Don’t even hear it anymore,” she said. “And you look like you’re hurting.” And then she played it again.

I was hurting, but it was just a broken heart, and it passed, and now there’s not even a scar. It wasn’t a divorce. It wasn’t a murdered son. Things could have been worse.

But not all things that happen at the Waffle House are bad. Last week, a waitress at the Waffle House in Le Marque, Texas, became somewhat famous for cutting up the ham of an elderly customer who was struggling to use his hands. Another customer present took a photo of the incident, posted it to Facebook, and within days the waitress, Evoni Williams, had a day named in her honor by the Mayor of Le Marque and even received a hefty scholarship from the college where she plans to attend this fall. So not all bad. And I don’t see something like that happening anywhere else. That lonely old man with bad hands would never have gone to a Bob Evans or Denny’s.