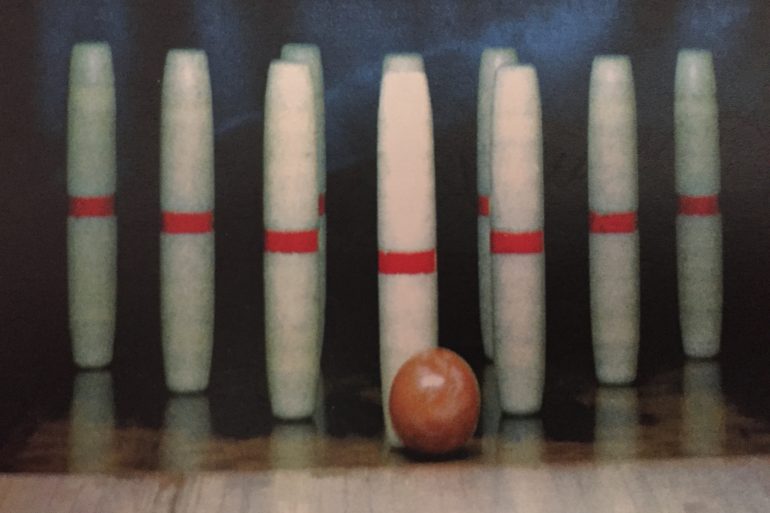 If you’re old enough to remember the 1960’s and 1970’s and think there was more social interaction back in those days—more dinners with friends, more community activities, more clubs, all of them better attended—you’re not wrong. And that increased level of interaction made for a healthier society. How I came to learn this is the result of my peculiar trip last month to Imperial Bowling Center, a candlepin bowling alley in Pittsfield, Massachusetts, in the middle of the Berkshire Mountains.

Candlepin bowling is not like regular bowling. The ball is much smaller, about the size of a grapefruit, and has no finger holes, and the pins are much thinner. You get three throws, as opposed to the two in regular ten-pin bowling, and pins knocked down are not cleared away, putting them in play on your next throw. Still, it’s a really hard game. The highest recorded score in the history of the sport is a 245. The one professional candlepin bowler I’ve met averaged, at the peak of his career, a 131; by comparison, the top professional ten-pin bowlers in 2016 averaged from 220-236.

But the game is a blast. I first heard about it many years ago, but it was only about five years ago that I finally played it, and that quite by accident. My son and I were in Portsmouth, New Hampshire, one summer day, and tired of history museums but not yet ready for dinner, I suggested we go bowling. I went online to find the nearest alley, and after we got inside I noticed something was different. “Look at those pins,” I said to my son. “What the hell are those?” he said, seven years old but precocious in his cussing, something that has never bothered me even though society keeps telling me it should. We’d stumbled into a candlepin alley, and I was giddy. I love new things and had always wanted to try my hand at the game. I stunk, but I was hooked.

So now, anytime I travel to Massachusetts, I seek out a candlepin alley. It was invented in Worcester, MA, in 1880, but the game hasn’t migrated much further than that. If you go to the International Candlepin Bowling Website (http://www.candlepinbowling.com), you’ll notice that the majority of alleys are in Massachusetts and Maine with a sprinkling in New Hampshire. I’ve also spotted an alley in Wilmington, Vermont, and strangely enough there is one at the Wyoming Civic Center in Cincinnati, Ohio. How the game got there I haven’t a clue, but if cricket made it from Britain to India, I shouldn’t be surprised candlepin bowling made it from Worcester to Cincinnati.

Last month, I was in Pittsfield, MA, and the minute we got to town I beelined me, my kid and his friend over to Imperial Bowling Center where I had bowled once before. We walked in, and the place was empty save for the middle-aged guy standing behind the front counter, average height, thin beard, minimal paunch.

“Last time I was here, an older woman sat behind that counter, and I hadn’t gotten halfway to it before she shouted out my shoe size, and she nailed it.”

The guy laughed. “That was my mother, Rosemary. I’m Bob.”

“Well, Bob, there were four in my group that day, and she nailed each one of our shoe sizes. So give me your best shot.”

He did, but he was one size off on each of us. Rosemary’s prowess is not to be minimized. I wear a size fourteen, which can’t be easy to guess, and my son was aged ten, so she had to contend with adult and children sizes. My other two friends were also adults, but she got every one of us right, even the one who had a half-size. When I told her how incredible she was, she responded modestly, “I’ve been doing this a long time.”

“Want me to put up the bumpers?” Bob asked.

“To guarantee mediocrity and make sure my kid never actually learns how to bowl?”

Bob laughed at that. “Boy I wish more parents had that attitude.”

Honestly, I do not understand the purpose of bumpers in bowling; if you never have to learn how to avoid bowling in the gutter because a bumper will always keep that from happening, then you will never learn how to bowl, so what’s the point of going? But then I’m a parent who always made his son take back any medal or trophy he got just for participating. He was five years old when I did that at his gymnastics class, and while some parents looked on in horror, no doubt ready to report me to social services, the instructor came over and shook my hand. My son quit gymnastics after two years and never was very good at the sport, and there’s no confusion in his mind since he doesn’t have a medal on his wall suggesting otherwise.

We switched shoes and commenced bowling while Bob talked on his phone. A couple of times, though, he interrupted his call to give me some advice. “Reduce your backswing. You don’t need it.” Also, “When you release, have it come off your pointer finger and middle finger with the middle finger last. You’ll get more action.” He was right. It helped my score, but not enough for me to break 100. After the second game, I gave the two boys some money to go play electronic shuffleboard while I bowled a couple more. Still didn’t break 100. I’ve candlepin bowled now dozens of times, and I’ve broken 100 only once.

It was when I was finished bowling and settled up that the afternoon took its completely unexpected turn. “Let me ask you something, Bob,” I said. “Why is this place empty? It’s a Sunday afternoon in winter when there’s not a lot to do outside, why is this place so empty?”

Bob shrugged. He picked up his phone and said into it, “Let me call you back.” He scanned the alley, all the lanes, then turned back to me. “This place used to be packed. Every night. It was all leagues. Teachers had a league. Firemen had a league. GE workers had a bunch of leagues. But that stopped in the early 90’s. There are no more leagues, it’s all open bowl now, and it’s just not as crowded. We still get corporate parties, birthday parties, and others trickle in.”

“Well, I can think of a couple of things. Harsher DUI laws had an impact. But the big thing was the closing of the GE Plant.” GE set up shop in Pittsfield in 1903, and at its peak it employed 13,000 of the 50,000 residents. By the early nineties it had shuttered all of its operations in Pittsfield and left behind an environmental disaster in the form of PCBs in the Housatonic River. Much of the Berkshires region (Western Massachusetts) thrives: there are very popular summer music and theater festivals, museums, camping, fishing and boating, skiing in winter; but Pittsfield has been left behind and never quite recovered from the departure of GE.

“That explains some of it,” I said. “But you still have teachers. You still have firemen and policemen. Why do you think their leagues shut down?”

“There’s a book by a Harvard sociologist called Bowling Alone,” Bob said. “It covers the breakdown of communities all across America and why it’s happening. You should get it.”

I’ve met so many people across so many spectrums that I know better than to have preconceived notions; nine times out of ten, they will be wrong. I’ll never forget the time I walked into a local diner back home and heard the retired farmers circled at the main table discussing entropy. That said, I was not expecting from Bob a recommendation of a book written by a Harvard sociologist, so I asked Bob more about himself. He had a Master’s in Education and had been a teacher for years, but not before doing some Peace Corps work in the Ukraine right after college. He left teaching and now ran a business in addition to mostly taking over operations at Imperial Bowl along with his brother, who was the financial guy. His parents still worked occasionally. It was his father, Bob, Sr., who took over Imperial Bowl in 1977, and I’d met him my first time there, when Rosemary had shouted out my shoe size. Bob, Sr., is the professional candlepin bowler I referred to above.

When I got home, I took Bob’s Jr.’s advice—ordered me a nice used edition of Bowling Alone and read it, or most of it, at least. According to Robert Putnam, the author, there is a decline in social interaction in America, or what he calls “social capital;” fewer and fewer of us are getting together at knitting clubs or Cub Scouts or Kiwanis or church functions, and the result is a negative impact on us as individuals and communities. Most surprising to me were the reasons why. Part of it is that we’re busy, and part of it is that we’re more spread out, but those pale in comparison to the two main reasons: first is that too many of us stay at home to watch TV; second is generational, which is to say that our parents and their parents were simply more inclined to get together socially than Baby Boomers and the generations after. Putnam wasn’t able to definitively state if that’s because these later generations were raised with TV or if there were some other reason, but the upshot is, as we’ve heard so often before, our communities are fraying, and TV plays a major role. Putnam’s book was published in 2000, before the onslaught of iPhones and our further descent into a world of screens, so I don’t know what the numbers might be now. In one respect, part of me thinks it has to have gotten worse, and yet something in me also senses that folks might be getting together more often now than they were, say, ten years ago, but that’s probably naïve, wishful thinking. I suspect that, as with any addiction, maybe we have to reach a real bottom as individuals and a society with our screens before we’re willing to walk away from those things to a better life; I did not need Putnam’s book to know that walking away from a screen leads to a better day. Check how you feel after an hour on Twitter as compared to an hour walking through town. Check your kid’s mood and behavior after two hours of him playing video games vs. two hours of him outside playing baseball or at church cooking with his peers for a local fundraiser.

“We’re seeing an uptick in bowling,” Bob said. “It ebbs and flows, but right now, more people are doing it. Maybe the Millennials have discovered the game.”

“What about candlepin?” I asked.

“Not so much. Not yet. Look, it’s a weird game. People who migrate toward it are people who are looking for something different. But we’re trying. We’re doing more outreach, and not just with candlepin. We’ve actually got a committee here in Pittsfield that’s working to get people out and doing things together again.”

I found that incredibly hopeful—the idea that a town put together a committee to get people together socially. I was also inspired by the fact that as we spoke, a few parties came in to bowl, one a young couple that had never done candlepin bowling before, another an African American family that was a bit dressed up, as if they’d just come from church. I’m not suggesting that I saw the nation’s problems evaporate before my very eyes. And yet, it was a waning winter afternoon, and for no reason beyond having fun together, people were coming to bowl, candlepin bowl, and they weren’t bowling alone. And that matters—for them, for their small city, and ultimately for all of us.