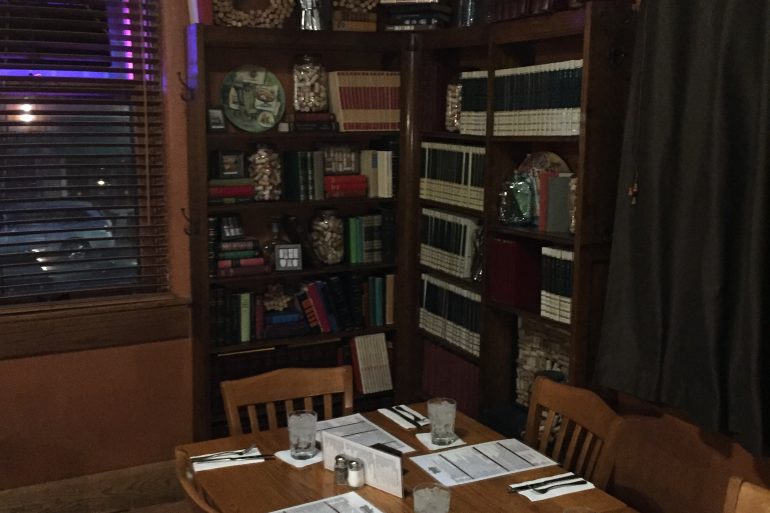 I was very excited to eat dinner at The Library. It’s located in Carmel, Indiana, an upper-income suburb of Indianapolis, quite probably the whitest city in America though not to be confused with Boston, which only wishes it were the whitest. (I stole that line from a satiric novella about our times called Now Playing by Erik Simon. If you thought it was funny, you should check out the book. If you didn’t think it was funny, you should visit Indianapolis.)

The restaurant is a former Carnegie library built in 1913, a small, square, honorable brick building like so many of the thousands of libraries he built across the country. The place is actually called Woody’s Library Restaurant, but I prefer to call it just The Library because where I’m from in southern Illinois, “Woody’s” denotes cheap fried chicken, which is not a bad thing by any stretch but something beneath the dignity of a library. Plus, while Woody’s is no doubt an affectionate nickname, it’s a bit dissonant with the quiet honor of a library, sort of like naming your local symphony hall Bubba’s Philharmonic. All of that aside, I was still very excited to be eating there that evening, irrepressibly so. I was in town for work, and as my colleague and I checked into our mid-level chain hotel, I overheard the middle-aged woman next to me, also checking in, ask the concierge where might be a good place to eat.

“The Library,” I chimed in.

“What’s that?” she asked, and I explained, giving her all I knew about the history of the building and how, in the late 1990’s, it had been converted into a restaurant.

“That sounds really interesting,” she said. “Is the food good?”

“It has to be,” I said. “A lousy chef would have never have been clever enough to open a restaurant in a former library.”

“It is good,” the concierge said, a younger woman and rather overweight, which is far from unexpected in the Heartland. Jim Harrison, one of my favorite authors and a portly Michigander himself, wrote that the Midwest is the one place in the world where overeating is still heroic, a line I find so wonderful I wish I could insert it into everything I say and do. “But there’s some other good places, too.”

“Don’t you dare say Bub’s,” I said. My brother lives in Carmel, so I’d visited plenty of times, and he’d taken me to Bub’s on a couple of occasions.

“Why not?” the concierge said, almost offended. Things got heated.

“It’s just a burger and fries.”

“It was voted best burger in the Midwest.”

“Yeah, because no one outside of Carmel was allowed to vote.”

I was having fun, but I think I’d actually peeved her a bit. Those Carmelites love their Bub’s, evidenced in part by the fact that my brother recommended it every time I came to town. As stated above, it’s a burger and fries joint, chicken tenders and onion rings, that kind of thing, all with the décor of an upscale bowling alley, and the locals were incredibly proud of Bub’s as if it were a real culinary destination. Don’t get me wrong—I like a good burger as much as anyone, but even places as pagan in their food practices as California have an array of options for a good burger. If I’m in from out of town, take me somewhere interesting, someplace special, or give me something unique, not something I can get just about anywhere else in America.

It was a cold winter night, so it was already dark when I went to dinner, even though it wasn’t that late, but an outer dark can enhance an inner warmth, and that certainly was the case at The Library which, inside, was perfect—old wooden floors, thick drapes, steam radiators (probably defunct) and the dining area not one large room but rather smaller rooms connected by wide doors. The décor was vintage Americana circa pre-1950 and heavily accented with a cork motif and, of course, books. I am one of those who cannot enter anyplace with books and not immediately start scanning the titles, and on the shelf near my table I spotted a hardbound collection of three Christopher Isherwood novels, an odd coincidence given that a couple days earlier I had begun rereading The Berlin Stories, a marvelous fictional account of Isherwood’s time in Berlin as it transitioned from the Weimar Republic to the Hitler dictatorship; it’s the book upon which the musical Cabaret is based. (Can’t imagine why I felt a yen to reread a book whose political backdrop featured an ignorant, authoritative clown destroying his democracy.) When my brother arrived moments later, my first words were, “Are these books for sale?”

Kevin, aka Woody, is the owner, along with his wife, Richelle. Kevin handles the business and front house operations while Richelle is responsible for the food and décor. He is a very friendly, pale, bald Midwesterner who came bounding towards my table with a cheerful, “Not for sale.” He explained that all the books were donated and that when people came to eat, they sought out the books they gave, proving yet again that there is nothing under the sun that an American can’t ultimately make about himself. “In one room over here,” Kevin said, “I have the complete collection of the annual Best American Plays going all the way back to 1898.”

I asked Kevin how he got the idea to open up a restaurant in the library. He told me that he had another restaurant just east of Indianapolis, a place that was an old roadhouse, and it was constantly packed, so when the Carnegie library went up for sale, he eagerly bought it. “It’s all about place,” he said. “People love going to an interesting place to eat.”

Which is true, but only if the food is good, and that is more than the case at The Library. Especially impressive is the selection. It’s hardly news that the Midwest isn’t incredibly daring in its food choices, especially the rural Midwest, but even in urban areas, wander too far off the beaten culinary path and you will be walking alone. So The Library menu has plenty of traditional fare—the burger, the prime rib, the French dip sandwich and pork tenderloin. But Richelle does some other amazing dishes not so easily found in the Heartland, including brulee´d brie bites, baked goat cheese and chilled lettuce wraps among the appetizers as well as jerk tilapia, garden quinoa and spicy shrimp tacos among the entrees. The menu has an extensive array of gluten-free, lactose-free and vegan choices (I hate vegans), and it boasts an “Indy Top 10 Wine List Award.”

I ordered the bison meatloaf and wondered, as I do every time I order bison, how I was able to. After all, in grade school, I had it hammered into my head that the bison were rendered extinct through typically rapacious white capitalist expansion. Nowadays, as we like to say back home, I can’t swing a dead cat without hitting a bison option in restaurants and grocery stores. No matter. My food was fantastic, including dessert (which is something I always include), but Woody is probably right: had he not placed his restaurant in an old library, I likely would have never come. But I’m sure glad I did.