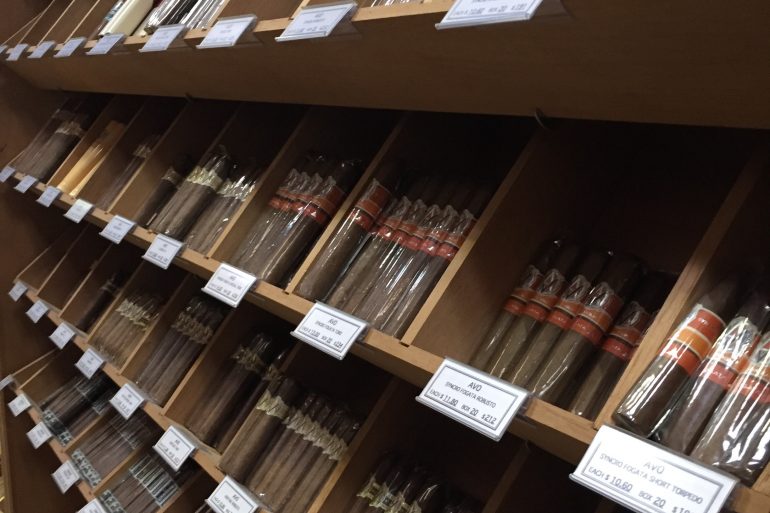 Like most tales of coincidence, this one will seem nearly impossible to believe. But if you believe in coincidence . . .

On my travels I almost always seek out local cigar shops for a couple of reasons. First, I love smoking a good cigar, and doing so has the ability to cast aside the world’s troubles, at least for the duration of that smoke. I side with Twain who claimed that if there is no tobacco in heaven, he shall not go. Second, at cigar shops I unfailingly have the most congenial interactions with a wide spectrum of people. Cigar smoking does not discriminate—it attracts all kinds. I am not saying that cigar smokers are the best, most tolerant people I know, but I do think they are at their best and most tolerant when smoking a cigar. My encounter last summer in San Diego, however, was something else entirely.

It was a late afternoon at the Churchill Cigar Lounge in Old Town. The place has a marvelous selection of cigars and beverages and a sizeable outdoor patio, heated in winter.  I went to the patio with my bottle of Pellegrino and my cigar for that evening (an Olivia Melanio Double Toro for those among the Elect). It was very crowded, and the only seats available were at a circular two-top on the far edge. I headed there, but for what happened next, some additional context is needed.

I had just finished reading a book by historian Edward D. Baptist called The Half Has Never Been Told. It’s about slavery in America, and it so walloped me with its greatness that I phoned the Slave Mart Museum in Charleston, South Carolina, and said it had to get this book on its gift-shop shelves. I still don’t know if they took my advice. I followed up and learned that because it’s a city-run museum, books picked to be sold there have to go through a bureaucratic vetting. Good thing I didn’t recommend Lady Chatterly’s Lover. (Incidentally, anyone else ever notice that it’s in those Bible belt states where one finds the great majority of Sex Superstores?)

Baptist’s book dismantles the historical narrative of slavery we’ve been fed for over a century by southern apologists eager to whitewash reality. For instance, they argued that slavery was not an essential part of the American economy; it was, but to admit that is to make the slaves (black people) instrumental in the country’s dynamic growth during the 19th century. Baptist details how America became the world’s second largest economy largely because of cotton which went from 14% of the value of the nation’s exports in 1802 to 42% in 1820. By 1840 it was 59%. With that cornerstone of a lie about the economy in place, southern apologists were able to construct any number of additional walls of falsehood to house their narrative. If slaves truly aren’t essential to the economy, then why does Master have them? Well, out of the benevolence and generosity of Master’s heart, providing those lucky darkies gainful employment as well as three hots and a cot, an opinion so far from defunct that candidates for the U.S. Senate still publicly espouse it. That attitude is further perpetuated in subtler forms from less likely corners, such as Spielberg’s movie Amistad in which the abolitionist, Lewis Tappan, is depicted as conniving and ruthless. You see, if masters truly are benevolent, then anyone who wants to end slavery, like abolitionists, must be evil or insane. Regarding the fictional depiction of abolitionists, the writer Marilynne Robinson notes, “The inevitability of the association of abolitionism with sick and devious motives and with hypocrisy is very nearly absolute.” I remember from 1985 the TV miniseries North and South. The abolitionist, played by a young Kirstie Allie, was a shrieking, hysterical lunatic; unfair as that depiction was, kudos to the director for knowing that if you need a lunatic, you’re not going to do better than a practicing Scientologist.

Another lie: slavery wasn’t even an efficient form of labor because check your Capitalism 101 texts, folks: people work hard only if they’re rewarded for it, and such rewards were not given to slaves. This nitwit notion trickled down even to the mouth of the young slave re-enactor I encountered strolling the grounds at Washington’s Mt. Vernon. To the credit of Mt. Vernon, this young man was not hired to soften our view of Washington holding slaves. A group of us were circled around him, asking questions, and when one lady asked if he had any affection for Mr. Washington, he responded, “Give me one reason why I should have anything but hate for him.” No one could. But then he regurgitated the argument that slavery was an inefficient form of labor.

Not even close, argues Edward Baptist, who documents that in 1801 in South Carolina, cotton pickers averaged thirty pounds per day. By 1840, at one labor camp in Mississippi, pickers averaged 340 pounds on a good day. All told, “picking productivity per picker from 1800 to 1860 rose 400%.” And the machines to facilitate this Industrial Age increase in productivity? Torture and Terror. In a multitude of forms. Unable to keep pace in the fields? Get shot. Fail to meet your daily quota? Get whipped. Or raped. Or . . whatever. This practice was depicted in Twelve Years A Slave which, incidentally, portrays the abolitionists as likeable, even heroic, quite possibly a first for Hollywood. Anyway, turns out there is a reward system other than money that makes laborers efficient—avoiding pain and getting to live.

Back at Churchill Cigar Lounge, a new patron came to my table because it had the only empty seat on the patio. He was a large black man, tall and obviously strong, late fifties, flecks of gray in the hair. “Mind if I sit here?” he asked.

We introduced ourselves and shook hands. He lit his cigar. The table was so small, pulling us so close together, that there was no polite way to avoid conversation. I learned he was a fireman, high ranking, and I asked if he was native to the area.

“Where are you from originally?”

“Sometimes. Some of it. All in all, not too much.”

“Got family back there?”

“Everyone. Parents, siblings, nieces and nephews. Grandparents at one time, but they’re all dead now. Born there and never left.” He took some deep puffs of his cigar and had the face of internal debate, as if deciding to elaborate on something. But that’s what you do when you have two hours of a cigar ahead of you: you elaborate on things. That’s why conversations at cigar shops can become so special: they’re allowed the opportunity.

“My grandpa actually wasn’t from Alabama,” he said. “He was from Virginia. A slave. When he was thirteen years old, he was chained at the feet with about a dozen other slaves, and they were forced to run all the way to Alabama. Not many people know that that happened.”

“I know it happened,” I said, dumfounded.

“I actually just finished reading this book that talked all about it.”

It was called a “coffle,” an African word for a chained human caravan. By the early 19th century, states like Virginia and Maryland had a surplus of slaves and acres of soil depleted by the years of growing tobacco. The future was in the deep South, where the soil was rich. More than one million slaves were wrenched from their lives and sent to make cotton the king, many transported by coffle. Edward Baptist covers this migration diligently, and it was the first I’d ever heard of it. The title, in fact, comes from a transcript he read of a former slave, Lorenzo Ivy, interviewed in the 1930’s; Ivy had watched the migration, seen the coffles and said to his interviewer: “‘Over the hills they came in lines reaching as far as the eye can see. They walked in double lines chained together by twos. . . . Truly, son, the half has never been told.’”

Back at the cigar shop, my new friend said, “I can’t believe you just read about this.”

I no longer spend much time contemplating coincidence. Many people argue that coincidence is no coincidence, and some go so far as to say that coincidence is God’s way of remaining anonymous. That way of thinking lies madness: you can’t stay sane if you’re using every happenstance in life to discern God’s will. Besides, it tends to be only the lucky ones who praise coincidence. Last fall, a terrorist drove his truck onto the sidewalk of the West Side Highway in New York, killing eight. Five of them were Argentines who just happened to be touring New York that day and who just happened to be walking along that spot of the sidewalk at precisely that moment. My hunch is their surviving family members aren’t swaddled in good vibes at the contemplation of coincidence.

And yet, how gigantically strange, this encounter at a San Diego cigar shop. My new friend said he had to get a copy of that book; we swapped phone numbers so I could text him the title. I still have his number, but I’ve not given a second thought to contacting him again. Doing so could only sully a moment that was so rarely perfect and perfectly rare that it still hardly seems real.