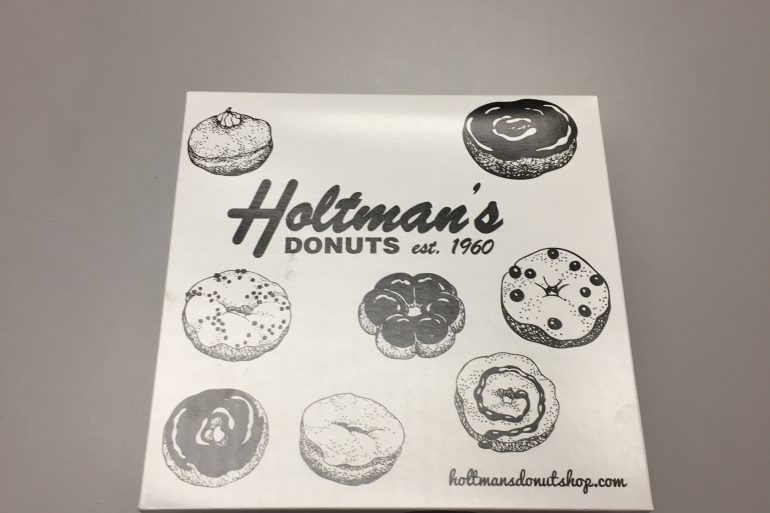 Perhaps one of these days I will research how doughnuts came to be, but I feel like all that knowledge might sully things between me and doughnuts, might kill the magic, like in the Emily Dickinson poem about a guy (and it had to be a guy because only a guy would do something this stupid) who dissected a songbird to figure out where that beautiful music was coming from; he found his answer, but his bloody bird sang no more. I prefer not to probe too deeply into the beautiful music doughnuts and I make together.

That doesn’t mean I don’t have questions and speculations that I sometimes entertain. You better believe I do. How could a rational, thinking person not? For instance, how did they come to call it a dough nut because it looks like no nut I’ve ever seen? Anyone ever seen a pecan, walnut, or Brazil nut with a hole in the center? Why not a dough circle or dough wheel? Hell, even a dough dartboard is closer to the mark. And why is a cake doughnut with glaze called a cake doughnut but a non-cake doughnut with glaze called a glazed doughnut? And what of other doughnut-related pastries, such as Long Johns? Which came first, the pastry or the undergarment? And if the former, why John and not Lloyd or Ted? One really could pursue these thoughts ad infinitum.

Pursuant to this worthy topic, I turn to Holtman’s Doughnuts in Cincinnati. Since first going there, I’ve learned that there are four Holtman’s locations, but the one I’ve been to is in the Over the Rhine section of Cincinnati, a terrific neighborhood key in the city’s comeback—boutique stores, great restaurants, interesting stone and brick structures from late 19th century. The name Over the Rhine derives from a canal that used to run through there over a hundred years ago when the population was mostly German immigrants, a fact I learned on a walking tour that included other trivia tid-bits such as it was in that neighborhood where the traveling-show marksman Frank Butler lost a shooting match to a fifteen-year-old girl named Phoebe Mosey. Frank responded by eventually marrying the girl, who later became famous as Annie Oakley, and the two hit the road with Buffalo Bill.

There’s a lot to love about Holtman’s, which should be something I could say about every doughnut shop everywhere, but alas, some places do manage to do the impossible by screwing up a pastry. (Be wary of the Poles on this; those people can make a kielbasa or pierogi that can embarrass any other national food, but for whatever reason, they cannot bake their way out of a paper bag. Could be why the Russians are always keen on attacking them but then Russians have no room to cast stones on this issue: their desserts mostly fall way short of their borscht, bigos and beef stroganoff.)

One of the things I love most about Holtman’s is that most nights, it is open until nine. Like orange juice, doughnuts are not just for breakfast anymore, and anyone who thinks otherwise is spiritually suspect. I also love the astonishing array that Holtman’s offers. Among that array is the cereal doughnut, that is, a doughnut with cereal sprinkled on top of the frosting, such as this Fruity Pebble one. Other cereals include Captain Crunch, Golden Grahams and who knows what all else. I’ve been there only a couple of times.

But all of this begs the question: with the cereal doughnut, is Holtman’s guilty of overreach? Sometimes, in our zeal for wonderful things, we really do go too far. But what is too far? It’s a very subjective question and doesn’t necessarily reflect one’s personal tastes. For instance, while I would never order the Holtman’s maple and bacon doughnut, I certainly understand its appeal. Similarly, while most of us would veto even the idea of a jalapeno or hot sauce or salsa doughnut, you know some twisted soul out there would love it, either a person who really does love Tabasco sauce or a person desperate for attention. (To be clear, Holtman’s does not offer any kind of salsa or chili pepper pastry, perhaps because these days such a product would elicit an armed and violent raid from ICE agents eager to ferret out the seditious Latino baker creating such anti-American sundries.)

That said, despite any reservations, I took the bait and bought a Golden Grahams doughnut. Candidly, it didn’t work. On paper, it sounds great, and even to the naked eye it was titillating. But early into the first bite I knew I’d erred. I didn’t like the crunch of the cereal mixing with the silence of the pastry, nor did I feel the overall flavor experience was enhanced. In the relentless piling on of sugar products, there does come a moment of diminishing returns. At IHOP, I love the pancakes, and I love the pancakes with syrup, and I love the chocolate chip pancakes with syrup, but you lose me with the whipped cream on top. (You also lose me with those flavored syrups, like boysenberry. If you’re one of those who thinks maple syrup needs a flavor enhancement, seek help immediately.)

The Golden Grahams on top of the frosting on top of the pastry was just too much. And I came to that conclusion from a relatively simple eating experience. I couldn’t imagine biting into a Fruity Pebbles doughnut and not have some Fruity Pebbles spilling all over the place. It’s easy for icing to hold in place a larger-flaked cereal, but with those small cereals, is Holtman’s not asking too much of its icing? And can you imagine the chaos of a motorist biting into a Fruity Pebbles doughnut? Does anybody really think that once that doughnut is gone, the motorist isn’t going to take his eyes off the road to retrieve those fallen pebbles? The sugar addiction has been triggered, and addictions don’t stop for traffic signs. And should an accident ensue, is Holtman’s legally culpable?

Ah, but there I go, splitting the lark and probing too deeply into the music I’ve made with Holtman’s doughnuts. Time to remain silent. Time to repair the damage with a pecan sticky bun or cinnamon twist.